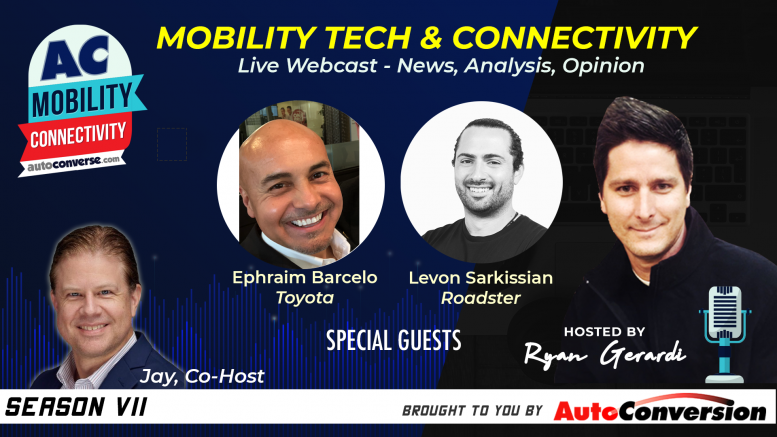 No thanks to the novel coronavirus pandemic, virtually all industry in-person events such as conferences, expos, workshops, and summits are now virtual. But are multi-hour and multi-day webinar events the best approach for companies and industry professionals?

This week on the Mobility Tech & Connectivity Show, your hosts Jay & Ryan provide their analysis to recent virtual events they have attended, and we welcome Special Guest Ephraim Barcelo to share his experience at the 16th Annual Automotive CX Summit Series where he participated earlier this week as a panelist in a breakout session about having a Digital Retail Champion in your Auto Retail Center.

Barcelo is General Manager of the Santa Margarita Toyota in Southern California.

Also on this week’s program…

In one of the largest economic development projects in Austin’s history, electric automaker Tesla says it will build a $1.1 billion assembly plant in Travis County that will employ 5,000 people.

Wages at the factory — to be located on 2,100 acres off Texas 130 and Harold Green Road — will start at $35,000 annually, counting benefits, bringing job opportunities and investment to a southeastern portion of the county that officials say is sorely in need of them.

It will produce the electric vehicle maker’s upcoming Cybertruck electric pickup, as well as be a second site to build its Model Y SUV. Tesla officials previously have said they intend to break ground on the factory by the third quarter of this year, although CEO Elon Musk said Wednesday that initial work at the site actually began last weekend.

Joe Biden’s campaign has instructed its staff to delete TikTok — the Chinese-owned social media app — from their phones due to security and privacy concerns, according to a report.

Dan Remus, the presumptive Democratic nominee’s general counsel, told the staffers in an email that they should “refrain from downloading and using TikTok on work and personal devices,” Bloomberg News reported.

The campaign has no official presence on the application, about which security experts have raised cybersecurity concerns.

A coronavirus outbreak on the Miami Marlins has led to the suspension of at least seven of the team’s Major League Baseball games. As of Tuesday, 15 of its players and two staff members had tested positive for coronavirus. The developments call into question sports leagues’ varying plans to continue to play amid a global pandemic.

Emptier Roads Not Resulting in Increase in Safety, Data Says

The COVID-19 pandemic has rendered U.S. roadways emptier and more lethal, according to preliminary data from the National Safety Council.
NSC, which focuses on eliminating the leading causes of preventable injuries and deaths, released estimates indicating that motor vehicle fatality rates rose in May, despite quarantines. Preliminary data for May shows a 23.5% jump in the fatality rate per miles driven compared with figures from the previous year.

The group released the estimates July 21 during a webinar focused on roadway safety during the pandemic. The mileage death rate per 100 million vehicle miles driven was 1.47 in May, an increase from 1.19 recorded in May 2019. Even though the fatality rate jumped, the number of miles driven in May dropped 25.5% compared with levels from the previous year.

Amazon (AMZN) CEO Jeff Bezos, Apple (AAPL) CEO Tim Cook, Facebook (FB) CEO Mark Zuckerberg, and Google-parent Alphabet (GOOG, GOOGL) CEO Sundar Pichai will be met with a barrage of questions from the 13 members of the Subcommittee on Antitrust, Commercial and Administrative Law ranging from their market power to the lengths they go to hold on to that power.