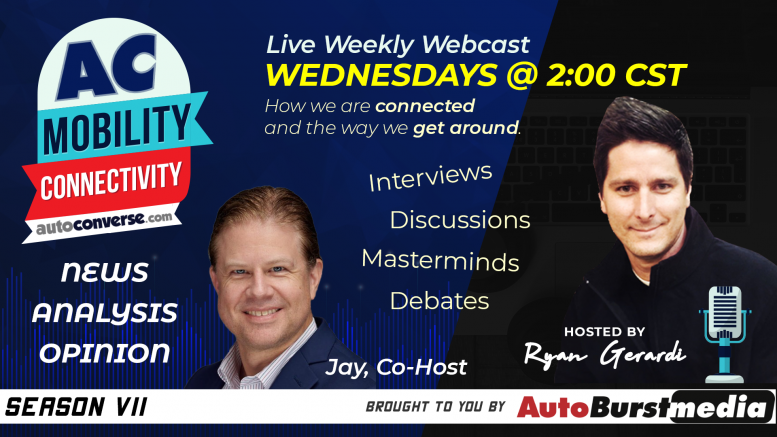 This week on the Mobility Tech & Connectivity Show it’s the Month of Mars with THREE Red Planet missions set to launch and we hit the reset button of Season 7 by looking at this week’s hottest mobility technology developments and drawing perspective from all the recent civil and political unrest to try to forecast where it’s all headed.

Last week’s show with Joe Web resulted in an epic 2-hour debate sequence around the #StopHate4Profit movement pushing national advertisers to pull ads in July from Facebook, among other matters.

This Week’s News items and Talking Points Include…

Register to Join Live on the Zoom

A Delaware bankruptcy court approved SIXT taking over 10 US airport branches from Advantage Rent a Car. This gives SIXT a chance to enhance its U.S. footprint for renting its premium fleet of vehicles, which has been more aggressive with its European footprint.

Starting most likely in mid-July, SIXT said it will receive the airport concessions at the strategically important locations at Boston (BOS), New York (JFK and LGA), New Jersey (EWR) and Houston (IAH).

SIXT also said it will also be renting its premium fleet in Orlando, Fla. (MCO), Denver (DEN), Maui, Hawaii (OGG), Honolulu (HNL) and Las Vegas (LAS) directly in the airport terminal.“SIXT thus offers its private and business customers an even better network and shorter distances for a comfortable journey,” the company said.

On its path to building the World’s Most Experienced Driver, Waymo partners with some of the world’s largest automakers to realize its mission to make it safe and easy for people and things to get where they’re going. And Waymo is now the exclusive global L4 partner for Volvo Car Group, a global leader in automotive safety, including its strategic affiliates Polestar and Lynk & Co. International.

Through a new strategic partnership, Waymo and Volvo will first work together to integrate the Waymo Driver into an all-new mobility-focused electric vehicle platform for ride hailing services.

Adam Frost, Chief Automotive Officer, Waymo: “This key partnership with Volvo Car Group helps pave the path to the deployment of the Waymo Driver globally in years to come, and represents an important milestone in the highly competitive autonomous vehicle industry. Volvo Car Group shares our vision of creating an autonomous future where roads are safer, and transportation is more accessible and greener.”

One of the byproducts of hydrogen fuel cells is water, which usually just goes to waste. But Nikola is working on reusing that water. In a recent tweet, CEO Trevor Milton revealed that water created by its fuel cell vehicles will be reused as windshield wiper fluid. But more interestingly he said that some of it will be collected to use as drinking water for a built-in fountain.

While there’s debate around how safe it is to drink fuel cell water, it would be quite the feature if they can pull it off. With so many electric trucks hitting the market, having a unique feature like this will really help it stand out.

National Electric Vehicle Sweden, or NEVS, which bought Saab’s assets in 2012 after it went bankrupt, introduced a new autonomous vehicle called the Sango. It’s equipped with Level 4 autonomous technology from the Chinese company AutoX but it was developed to use any self-driving software.

The Sango is designed for ride sharing, not for personal ownership. It features a flexible interior with three settings; private, social and family. Depending on the setup it can seat up to 6 people. It’s also fitted with walls that can be raised and lowered for more privacy. NEVS will test 10 vehicles in a pilot program in Stockholm, which will be open to the public.

Over the last decade, the Jeep brand became the most important franchise for FCA. Sales soared the world over and nobody has really given Jeep any competition? Well, Ford is now going directly after Jeep by bringing back the Bronco nameplate.

Bronco is going to become its own sub-brand within the Ford Motor Company and will launch with three models, a 2-door, a 4-door and a smaller SUV called the Bronco Sport. The new 2-door and 4-door Bronco are aimed directly at the Jeep Wrangler and will offer hard core off-road capabilities. The Bronco Sport is aimed at the Jeep Cherokee, but looks an awful lot like the Land Rover LR4.

As part of the rollout, Ford is reminding everyone that it actually built 270,000 jeeps during World War II. And to remind everyone that the brand has been around for over half a century, Ford is showing off this original sketch from 1963.

It also dug up footage of off-road races from the 1960’s that the Bronco won, like the Mint 400 and Baja 1000, to cement its off-road heritage. Ford is also including Bronco Off Rodeo, a community-driven initiative akin to the Jeep Jamborees?

Colin Kaepernick will be featured in an exclusive docuseries produced by ESPN Films as part of a first-look deal with The Walt Disney Co.

The deal between Kaepernick’s production arm, Ra Vision Media, and Disney was announced Monday. The partnership will focus on telling scripted and unscripted stories that explore race, social injustice and the quest for equity. It also will provide a platform to showcase the work of minority directors and producers.
“I am excited to announce this historic partnership with Disney across all of its platforms to elevate Black and Brown directors, creators, storytellers, and producers, and to inspire the youth with compelling and authentic perspectives,” Kaepernick said in a statement. “I look forward to sharing the docuseries on my life story, in addition to many other culturally impactful projects we are developing.”