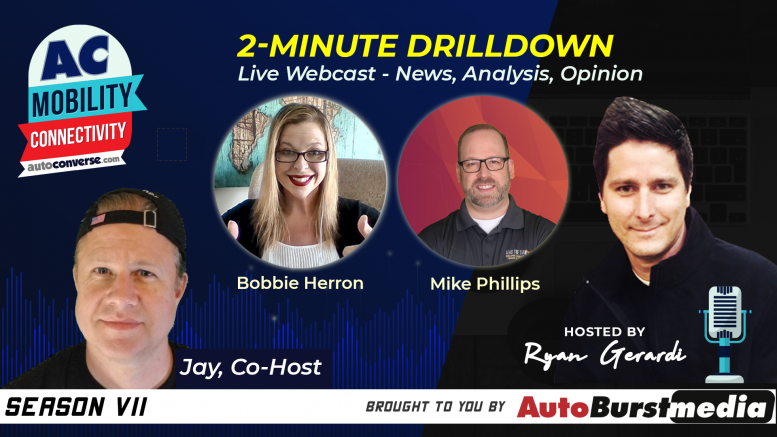 This week on the Mobility Tech & Connectivity Show we enter new ground as the nation and globe face what appear to be an existential crisis. Chaos is ensuing socio-economically, geo-politically, and thermonuclear dynamically…ok well hopefully not that far.

But significant novel Mayan ruins were recently discovered. And the State of Minneapolis is vowing to “dismantle its police force.”

As temperatures rise – figuratively and literally, it seems like almost anything is a go right now. But that could not be.

Let’s find out this Wednesday on the MTC Show with Jay & Ryan for another round of the 2-Minute Drill Down where our participants are limited to 2-minute responses.

Bobbie Herron has served in leadership roles across the Auto Industry for the last 17 years, most recently within two powerhouse automotive groups alongside automotive investment and performance partner ZMOT Auto. Bobbie now serves both Dealers and Vendors as the President & Founder of “The Bees Knees Agency”, a premier Automotive Operations Digital Marketing, Dealership Training, and Operations Consulting Agency. Heron was also named winner of the 2015 Automotive News 40 Under 40 award.

Mike handles sales and marketing for McCloskey Motors in Colorado Springs. He is a Digital Magic Maker, a podcast host, YouTuber, and Sales and Leadership coach and trainer. Mike has over 30 years of leadership and coaching experience. Learn more about Mike at www.LeadTheTeam.net

Faced with a slump in demand that has been exacerbated by the coronavirus pandemic, the French carmaker detailed plans on Friday to find 2 billion euros ($2.22 billion) in savings over the next three years.

The automaker acknowledged that its global ambitions had been unrealistic, announcing plans to cut about 15,000 jobs, shrink production and restructure French plants as it pressed the reset button and sought to banish the spectre of Carlos Ghosn.

“We thought too big in terms of sales,” said interim Chief Executive Clotilde Delbos, adding the company was “coming back to its bases” after investing and spending too much in recent years.

Renault was under pressure even before COVID-19 hit, posting its first loss in a decade in 2019, and has said nothing would be “taboo” as it reviews its business.

Hyperscience, an automation startup which is emerging as one of the higher-valued enterprise startups in the New York tech ecosystem, announced last week that it raised $60 million in a Series C funding round led by Bessemer Venture Partners. Hyperscience didn’t disclose its valuation, but the investment likely values the startup at more than $250 million.

Hyperscience presents a potential future challenge to a buzzy category of software called robotic process automation, or RPA, which addresses problems through programmable “robots,” code programs that can carry out a repetitive task in place of a human.

Hyperscience can do something RPA hasn’t easily achieved: create systems that know when to loop in humans and when to leave them out of a process, in a way that doesn’t require a heavy touch from outside business analysts.

By a unanimous vote, the San Bernardino County Transportation Authority’s Board of Directors supported the idea, directing staff to flesh out the proposal and postpone a $3 million study of other airport-rail connections.

The tunnel idea is seen as a cheaper, faster alternative to above-ground rail projects, including the extension of the electric-powered “L” Line light-rail, formerly the Gold Line, from Pomona into the airport terminal. A zero-emission train off the Metrolink San Bernardino Line, and a connection from the Riverside heavy-rail line that has a stop south of the airport were also on a list of rail alternatives.

The crux of the plan is to dig a tunnel called the Ontario Airport Loop that would be 2.8 miles long, 14 feet wide, and 35 feet underground between the airport and the suburb of Rancho Cucamonga. Instead of the modified Teslas mentioned in The Boring Company’s original proposal, San Bernardino County Supervisor Curt Hagman told the paper TBC is “working with Tesla to develop electric vans that can seat up to 12 people and their luggage.” The vans, on rubber tires, would run the tunnel at up to 127 miles per hour, making the 2.8-mile trip in around 90 seconds to two minutes.

A giant platform nearly a mile long made of stone, clay and earth is both the earliest- and largest-known monumental structure constructed by the ancient Maya, dwarfing their biggest pyramids in magnitude, a new study finds.

Now scientists have discovered the largest known ancient Maya ceremonial structure, a platform roughly 1.4 kilometers long, 400 meters wide and 10 to 15 meters high. Radiocarbon dating of charcoal samples from the platform revealed it was constructed between 1000 and 800 B.C., which also makes it the oldest known ancient Maya ceremonial structure.

A reporter who was awarded CNN’s “Journalist of the Year” prize has resigned from his job and admitted to writing fake news for several years because he felt “pressure.”

“I am sick and I need to get help,” Claas Relotius said in his confession. He explained it was “fear of failing,” that made him falsify the news for liberal outlets, earning him praise and prestigious awards in the process.

“My pressure to not be able to fail got ever bigger the more successful I became.”

According to Der Spiegel, Relotius “made up stories and invented protagonists” in many of his articles in order to push liberal talking points, demonize conservatives, and reinforce the globalist world view.
Relotius, who was awarded CNN’s highest prize for journalism in 2014, was exposed as a long-term writer of fake news after another reporter raised suspicions about a popular anti-Trump story he wrote recently about the US-Mexican border.

Over 140 scientists who have received funding from the philanthropic group, the Chan Zuckerberg Initiative, sent Facebook founder and CEO Mark Zuckerberg a letter on Saturday calling the social networking company out for its recent stance on President Donald Trump’s inflammatory posts on police brutality protesters.

“As scientists, we are dedicated to investigating ways to better our world,” reads the letter obtained by The Washington Post. “The spread of deliberate misinformation and divisive language is directly antithetical to this goal and we are therefore deeply concerned at the stance Facebook has taken.” The letter specifically calls out Trump’s social media post which said “when the looting starts, the shooting starts,” defining it as a “clear statement of inciting violence.”

Facebook and Zuckerberg himself have been criticized in recent days for defending the company’s decision to keep the post on its website. The inaction on the social networking site’s part was in direct conflict with the response of other platforms, such as Twitter which hid the tweet behind a warning label.

Americans More Troubled by Police Actions in Killing of George Floyd Than by Violence at Protests, Poll Finds

Voters by a 2-to-1 margin are more troubled by the actions of police in the killing of George Floyd than by violence at some protests, and an overwhelming majority, 80%, feel that the country is spiraling out of control, according to a new Wall Street Journal/NBC News poll.

The poll also reveals striking partisan divides in how voters view a pair of unfolding national crises, including the unrest sparked by the killing of Mr. Floyd, the black Minneapolis man who was in police custody, and the coronavirus pandemic

Case For The Bright Future Of Brick-and-Mortar Retail

Physical retail, depending on which categories you include commands 75-89% of the market. If you include all categories as the US Government does, you end up at 89% because that includes automobiles (21% of retail), grocery (12.6%), gasoline(8%) and bar/restaurants (12%).

Remove autos and service (but keeping grocery) and you get to the lower end of 75%.

Reality is that eCommerce is such a small part of the market that on a dollar basis physical retail is growing more than eCommerce. 87% of store closures are Department Stores or Specialty Apparel. Taking those two out, segments like Grocery, Big Box, Discount/Off Price, Specialty Beauty and others are actually growing considerably. In fact, just 16 retailers are responsible for 73% of store closings in 2019. That’s a lot of growth outside of those few failing.

The rising costs of online acquisition are squeezing the margins out of eCommerce for everyone but Amazon, Facebook and Google.