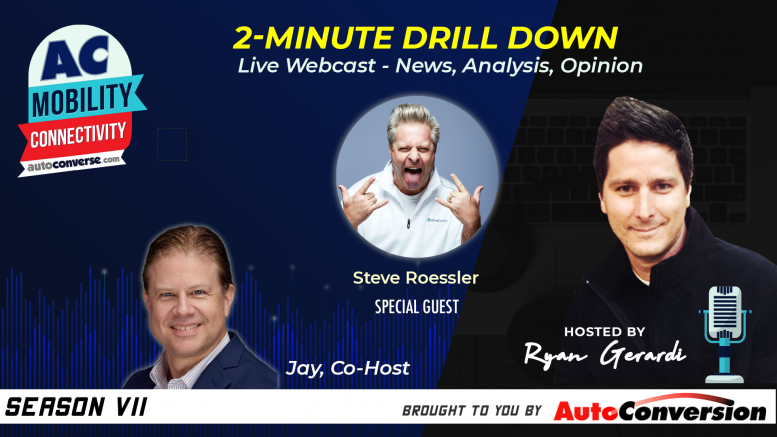 Could pop culture icon Kanye West be the next US President? Find out in this week’s episode of the Mobility Tech & Connectivity Show where we explore the artist’s announcement that he intends to run for President despite missing required deadlines and protocols.

Also on the show this week…

Register to Join Live on the Zoom

Kia Motors Corporation has announced the launch of ‘Live Stream Showroom’, a new online platform that offers customers access to personalized virtual viewings in select Kia dealerships. The new platform was introduced initially in Qatar, Saudi Arabia and Pakistan, and is being expanded throughout the Middle East and Africa in countries such as Kuwait, Bahrain and South Africa with the aim of a global implementation in the future.

Live Stream Showroom offers customers a live video session with Kia dealers for a digital experience tailored to meet their individual needs. Customers will receive one-on-one consultation with live responses to questions, and explore the design and features of their chosen model and see demonstrations of new technology and functionality on demand.

Erie Insurance commissioned a national survey to find out which features drivers disable the most and why. The survey, which was limited to drivers whose cars were model year 2016 or later, asked if they had ever turned off or disabled any of 11 features commonly available in newer vehicles.

The second most disabled feature was lane keeping assist, which helps prevent the car from straying across lane markings by automatically making light braking or minor steering adjustments. Almost a quarter of drivers (23 percent) said they turned off lane keeping assist, and the most cited reason was that they found the feature annoying. One respondent said the feature doesn’t work well [because] it hugs the lines too closely and another said it reduces the car’s fuel economy.

An analysis by the Insurance Institute for Highway Safety (IIHS) and the Highway Loss Data Institute (HLDI) found that forward collision warning combined with automated emergency braking cuts front-to-rear crashes with injuries by more than half (56 percent). But the Erie Insurance survey found that, of the drivers whose vehicles have these features, 11 percent turn off forward collision warning and 17 percent turn off automated emergency braking.

Uber to buy Postmates for $2.65 billion to expand delivery

Uber Technologies Inc. agreed to buy Postmates Inc. for $2.65 billion to expand in food delivery after the coronavirus pandemic cratered demand for ride-hailing, its main business, and an earlier attempt to acquire Grubhub foundered.
The all-stock deal is a modest outcome for Postmates, once a pioneer of the gig economy that was outmaneuvered by deep-pocketed competitors. It had been valued at $2.4 billion in an investment last year, a person with knowledge of the matter said at the time.

Uber estimates that it will issue about 84 million shares of common stock for 100 percent of the fully diluted equity of Postmates, the company said in a statement announcing the deal Monday.

Amazon.com Inc. plans to create at least $100 million in stock awards to retain the 900-plus employees of Zoox, the self-driving car startup it offered to buy last month, and can walk away from the deal if large numbers of them turn down job offers from the technology giant.

Amazon, which is aggressively expanding into self-driving technology, announced June 26 it had agreed to acquire the Silicon Valley company, which was founded on an ambitious effort to design a fully autonomous vehicle from scratch rather than retrofitting existing cars for self-driving.

Amazon will pay $1.3 billion in cash for the takeover, which the parties hope to close by September, according to deal documents seen by Reuters.

Rapper Kanye West said in a new interview that he’s running for president and asked President Donald Trump and presumptive Democratic presidential nominee Joe Biden to drop out of the race.

West created a stir on July 4 when he announced he’s running for president in 2020. He had previously said he was targeting 2024 for a presidential bid.

The 43-year-old told Forbes in an interview that he is running, and he’s looking to win.

West is running under a new banner called the Birthday Party; his running mate is Michelle Tidball, a preacher in Wyoming, where West bought a ranch.

West is being advised by his wife, Kim Kardashian-West, and technology mogul Elon Musk. West said he offered Musk the position of heading NASA.

On Tuesday, the WNBA Players union called on commissioner Cathy Engelbert to remove Kelly Loeffler as co-owner of the Atlanta Dream after the junior senator in Georgia wrote a letter to Engelbert regarding the league’s plan to have “Black Lives Matter” and “Say Her Name” on jerseys when the league restarts. Loeffler, who has been part of Dream ownership since 2011, requested that American flags go in place of the anti-racism messages.

Engelbert, in a statement, noted that Loeffler has not been removed, but is “no longer involved in the day-to-day business of the team,” failing to address the status of her co-ownership. “The WNBA is based on the principle of equal and fair treatment of all people and we, along with the teams and players, will continue to use our platforms to vigorously advocate for social justice,” the statement said.

It’s not the first time that Loeffler’s removal has been called for. When Black Lives Matter protests were first occurring in Atlanta, she referred to the protesters as “mob rule.” She also posted a message advocating for the exclusion of transgender athletes in girls’ and women’s sports in support of the anti-LGBTQ group Family Project Alliance of Georgia.