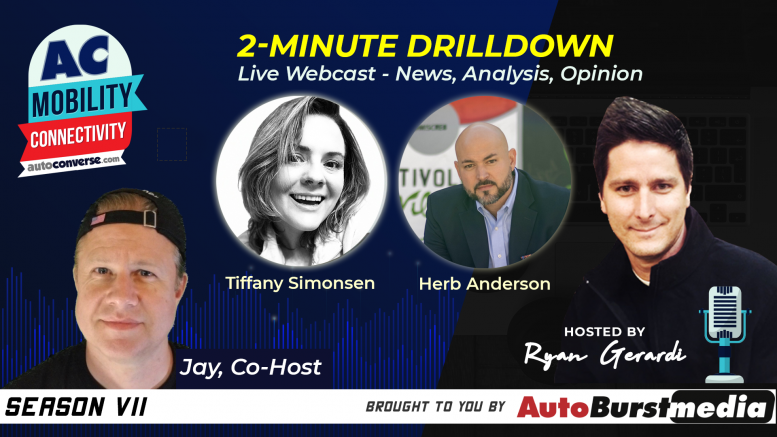 As we head into this week’s Mobility Tech & Connectivity Show, the stigma of the coronavirus pandemic lockdowns seem to have taken a back seat. If you were concerned about the lockdowns escalating to any civil unrest, those concerns are now very real.

It seems as though idealist divisions among political leaders, corporate powers, and now citizens have reached a tipping point. And if you have any love or national pride for traditional America, expressing it and speaking out about it could put you at risk of a mob attack. At least in some city streets.

Which brings to mind a famous and now relevant quote from historian and philosopher William Duran, “A great civilization is not conquered from without, until it has destroyed itself from within.”

The context of this quote was that “the essential causes of Rome’s decline lay in her people, her morals, her class struggle, her failing trade, her bureaucratic despotism, her stifling taxes, her consuming wars.”

Which brings us to this week’s MTC Show which is back with the “2-Minute Drill Down” where two guests face off in a round of retorts limited to two minutes each in response to select current events happening in the world with your hosts Jay and Ryan.

News Items and Talking Points This Week Include…

As the founder and host of the increasing popular automotive podcast, Dealer Talk, Herb also appreciates the opportunity to acquire even more insight from the areas of mastery that his various guests within the industry can provide. This not only benefits himself as a student of the industry, but also his loyal audience of enthusiasts around the world.

After nine years, Americans are back in the business of launching astronauts into space.
Following a weather delay earlier this week, Mother Nature finally allowed NASA and SpaceX to end the longest gap in U.S. spaceflight history Saturday. Douglas Hurley and Robert Behnken lifted off at 3:22 p.m., their Falcon 9 rocket blazing into hazy skies over Kennedy Space Center as thousands of tourists watched from up and down the coast and even President Donald Trump looked on.

If the mission is a success, it will mean NASA can stop paying for seats aboard Russian rockets and instead rely on American companies like SpaceX to ferry astronauts to the space station, just as they have for cargo and supplies.

The Dragon capsule will dock with the space station at 10:29 a.m. on Sunday. Then, Hurley and Behnken will spend anywhere from one to four months aboard the station, depending on how the capsule performs.

One highlight of their flight will be taking home a symbolic American flag left behind at the space station by the crew of Atlantis in 2011. That flag, which also flew on the first shuttle mission in 1981, will next be taken to the moon during NASA’s Artemis program.

Amazon’s Zoox deal may save $20 billion, put Tesla on its heels

Amazon.com Inc.’s talks to buy driverless vehicle startup Zoox Inc. has analysts speculating the deal could save the e-commerce giant tens of billions a year and put auto, parcel and ride-hailing companies on their heels.

Shipping costs are one of Amazon’s largest expenses and may reach $90 billion in the coming years, Morgan Stanley’s internet, auto and transport analysts wrote in a report Wednesday. An autonomous offering could save the company more than $20 billion annually, they estimate.

Other companies in the automotive and chip industries have also held talks with Zoox about a potential investment, according to people familiar with the matter. At least one other business besides Amazon has offered to buy the company, they added. Zoox is unlikely to sell for less than the more than $1 billion that it has raised, according to the people, who asked not to be identified discussing private negotiations.

Twitter has placed a fact-checking warning on a pair of tweets issued by President Trump in which he claims without evidence that mail-in ballots are fraudulent.

Twitter’s move on Tuesday marks the first time the technology company has sanctioned Trump as criticism mounts about how the president has amplified misinformation to more than 80 million followers on the social media platform.

President Trump on Thursday ramped up his war with social media companies by signing an executive order that aims to curtail their legal liability protections – two days after Twitter slapped fact check labels to a pair of his tweets about fraud in mail-in voting for the first time.

Social media companies “that engage in censoring or any political conduct will not be able to keep their liability shield,” Trump vowed, adding that companies “like Twitter enjoy an unprecedented liability shield based on the theory that they are a neutral platform — which they are not.”

The police officer who was seen kneeling on the neck of George Floyd, the black man who died in custody on May 25 following the exchange with police, was charged with third-degree murder and manslaughter on May 29. Derek Chauvin was fired following the incident, along with three other officers. A bystander video captured Chauvin kneeling on Floyd’s neck for several minutes, despite his pleas that he could not breathe.

According to a Minneapolis Police Department statement released on May 26, two officers responded to a report of a forgery in progress in a South Minneapolis neighborhood shortly after 8 p.m. The statement says that Floyd “physically resisted officers,” was handcuffed, and then “appeared to be suffering medical distress.” The statement said he was transported to Hennepin County Medical Center by ambulance, and “died a short time later.”

Listen to the Podcast

The MTC Show is recorded and then featured on the AutoConverse Mobility Tech & Connectivity Podcast. Subscribe to the podcast by following this link. or searching. ‘AutoConverse’ on your preferred podcast app.