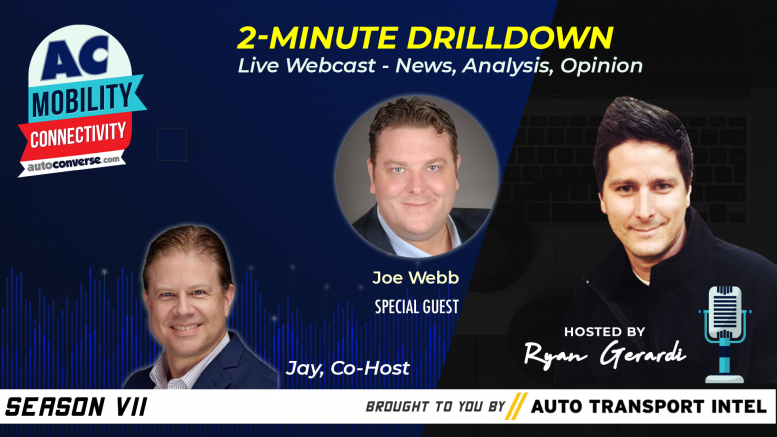 This week on the Mobility Tech & Connectivity Show we have Joe Webb back on the air with me and Jay. Joe helped kickoff the ‘2-Minute Drill Down’ idea with us back in May. Which was incredible!

At that time, we were talking about police drones, government tracking, and of course Tesla and Founder Elon Musk pushing the State of California about reopening the Tesla plant.

That was May 12. Nearly two months ago. Today Musk is in the news because he is on track for a $50b pay out as the company valuation approaches $100b. And some people have a problem with that.

Other News items and Talking Points Include…

Call Into the Show

Register Here to Join Live on the Zoom

Tesla investors are being urged to vote to remove Elon Musk, the electric vehicle company’s founder and chief executive, from the board of the firm as anger mounts over his bonus deal that could pay him a record $55.8bn (£40bn).

Pirc, an influential adviser to shareholders, including the UK’s local authority pension funds, on Tuesday recommended that investors voted against Tesla’s executive pay deal because it “unfairly enriches the chief executive”.

The shareholder adviser called on investors to vote against re-electing Musk to the board because of the pay deal, and warned he posed “a serious risk of reputational harm to the company and its shareholders”.

The FDA has officially granted marketing authorization to the first game-based therapeutic.1 Developed by Akili Interactive Labs, Inc. EndeavorRx, a video game, is a non-drug treatment option for children ages 8-12 years old who have been diagnosed with certain types of ADHD.

The first-and-only prescription treatment of its kind, EndeavorRx has found a way to make treatment fun, accessible, and virtual, which is a game-changer for the mental health industry.

Facebook founder and CEO Mark Zuckerberg has lost more than $7 billion in personal wealth as companies stopped advertising on the social media platform, according to Bloomberg’s Billionaire Index.

Facebook shares dropped 8.3 percent on Friday, eliminating $56 billion from the company’s market value, after British-Dutch consumer goods company Unilever joined a number of other big brands in pulling its advertisements from the site, according to Bloomberg.

Zuckerberg now ranks at No. 4 on the index with a net worth of $82.3 billion, behind Amazon founder Jeff Bezos, Microsoft founder Bill Gates and LVMH Moët Hennessy – Louis Vuitton CEO Bernard Arnault.

Civil rights groups call for national advertisers to pull ads from social media during the month of July.

Other talking points may include…