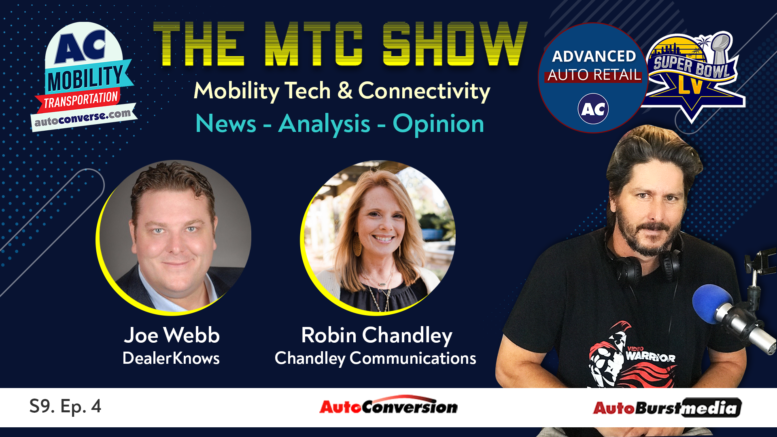 The much-anticipated 2021 Super Bowl featuring, of all future Hall of Famers in the game, Tom Brady who handily super-secured himself a place in history unimaginable to conquer, also delivered on its commercial experience.

From pre-game shows and entertainment, halftime, the commercials to the game itself nearly 100 million people tuned into to watch the big game and be engulfed into consumerism.

Last week on the Mobility Tech & Connectivity Show we looked at the new car shopping tool AskOtto which you can learn more about here on the site. This week on the show the good, bad, and ugly tradition of reviewing this year’s Super Bowl commercials continues, with an expanded focus on the consumer experience as a whole.

On the automotive and mobility front we had some newcomers to help expand the “car” commercial classification.

UberEats bridged a couple generations by having Cardi B on Wayne’s World.

Amazon not only made Alexa human and male, but a sex fantasy as well…

Vroom entered the arena with a sucker punch to car dealers, something that caught the attention of many in the automotive industry.

Volvo focused its 30-second slot on safety, electrification, and a dream car configurator challenge for a chance to win “big.”

General Motors and Audi had something going on between them and the USA and Norway.

And finally we have State Farm cleverly adding celebrities, in this case Drake, into its commercial mix.

Encore this year goes to Porsche – “Mr. E” which was made by the automaker but decidedly chosen not to air during the game.