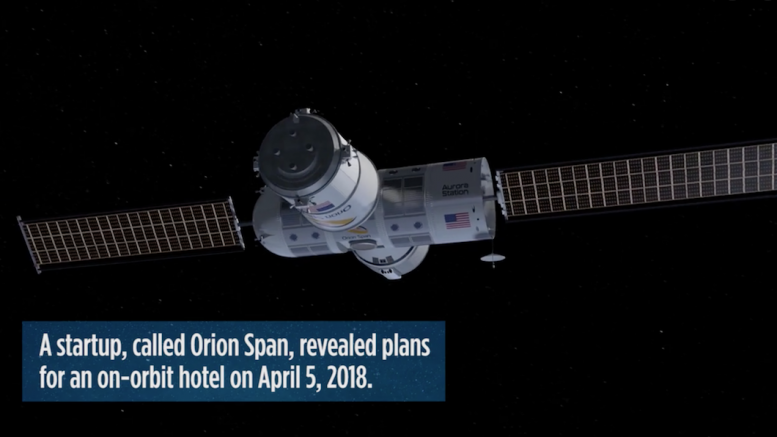 Sci-Fi fans are in for a special treat – if they have a bank account willing to go the distance.

Aurora Station, billed as the “first luxury hotel in space ,” may be for you. Houston-based Orion Span Inc. hopes to launch the modular station in late 2021 and welcome its first guests the following year, with two crew members accompanying each excursion. The platform would orbit 200 miles above Earth, offering six guests 384 sunrises and sunsets as they speed around the planet for 12 days.

Once, such a thing would have clearly been the stuff of fiction. Now, in the age of SpaceX, Blue Origin, and Virgin Galactic, the idea that a private company would launch an orbiting hotel seems almost pedestrian.

“We want to get people into space because it’s the final frontier for our civilization,” said Orion Span’s founder and chief executive officer, Frank Bunger, a former software engineer. Orion Span’s offering won’t be for everyone, however: Launch and re-entry are not for the faint of heart.

Aurora Station would host six people at a time, including two crewmembers and four guests, for a 12-day stay in space, the startup said. The station would soar 200 miles (320 kilometers) above the Earth’s surface, in low Earth orbit, completing one trip around the planet every 90 minutes. This means that guests would experience an average of 16 sunrises and sunsets every day and have the chance to fly above their hometowns. They would also have the opportunity to see the northern and southern auroras from the station’s windows.

In addition to the spectacular views of Earth and space, Orion Span has said that travelers would experience zero gravity and be able to fly freely throughout the station. They would also have access to a unique virtual reality experience in the station’s holodeck and would participate in research experiments such as growing food while in orbit — which they would be able to take home with them as a souvenir.

Beyond the physical limitations to embarking, there are also the fiscal ones – the 12-day stay starts at $9.5 million per person, or about $791,666 a night.

“We’re not selling a hey-let’s-go-to-the-beach equivalent in space,” Bunger said. “We’re selling the experience of being an astronaut. You reckon that there are people who are willing to pay to have that experience.”