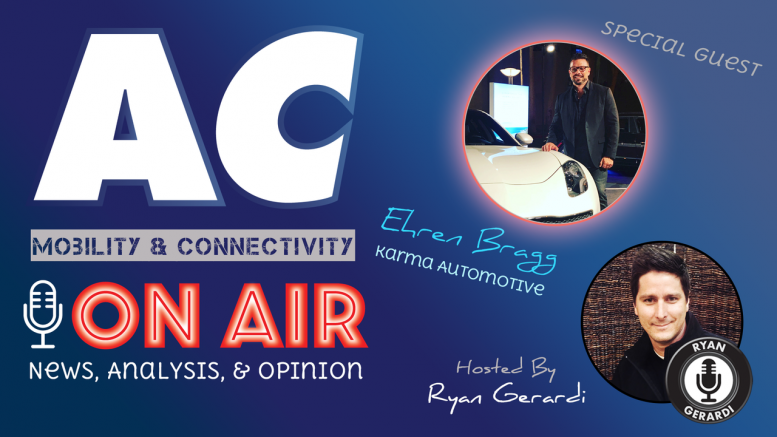 The luxury car market is expanding across the globe. So too is the EV market, hybrid market, and performance sport market. Which is why when Fisker automotive went belly-up, Chinese automotive supply company Wanxiang picked up Fisker’s assets from bankruptcy in 2014. Assets that included design, a plug-in hybrid powertrain, and a manufacturing facility in Delaware. Karma Automotive was formed in October 2015.

In this week’s episode of AC ON AIR, we sit down with Karma Automotive Orange County Store Director Ehren Bragg.  During the show, we talk about the ultra-luxury car market and the exciting technology fueling the interest.  We also touch on the unique challenges of being a small manufacturer, as well as the problem with inevitable comparisons with Tesla.

Karma Automotive – The Experience of Driving

When you hear that Karma is a luxury brand for electric hybrid cars, you’d likely think of it as a rival for Tesla.  But Karma goes beyond Tesla. If Tesla is luxury, Karma is small batch luxury. It’s a difference Karma Automotive Store Director Ehren Bragg embraces.

“A Tesla is like a really great appliance,” he says.  “It runs great, it looks good. It’s not necessarily something you want to spend a ton of time with.”

There’s a difference in customers as well, according to Bragg. Tesla customers tend to be more left-brained and focused on the numbers rather than the car itself.  Karma drivers, on the other hand, are “more appreciative of the luxury experience we provide. They appreciate the fact that the car is so unique. You don’t see yourself on every street corner with our vehicle. […] It’s how the car makes them feel; it’s more about wearing the car than driving the car.”

That commitment to creating an experience and approaching car manufacture as an artisanal craft is evident in every part of their cars.  Dual electric motors offer a 50 mile radius of pure electric energy. After that, its 400 HP gas engine kicks in for an additional 250 miles. The real magic, though, is in the roof.

Karma established an industry first with the addition of solar panels that can help boost electric power.  In a sunny area that can translate into 1,000 miles free of emissions, free of cost and completely free of guilt.   It goes along with their motto:  Conspicuous Without All the Consumption

Solar panels aren’t the only industry first established by the company.  To illustrate their point about each car being its own piece of art, its own experience, Karma has each car’s badge painted by hand.

The design for the badge was reportedly inspired by “an eclipse, showing a spark of sun, the eternal symbol of endless renewable energy.”  It’s the kind of detail that illustrates the care given to each vehicle. It’s also beautifully designed. Gear Patrol called it “The Most Beautiful Modern Car Detail” when it was revealed in March of 2018.

All these things and more are what is leading to Karma expanding its retail footprint across the US.

Inside EV released the figures in sales to round out 2018 tracking plug-in electric vehicle sales.   They began their tracking in 2013 and offer the full archive on their site. In order for a vehicle to count as Sold for InsideEV, the vehicle must be bought or leased and been delivered so the new owner has possession.  In 2017, that number had been 199,826. At the end of 2018, they’re reporting 361,307 vehicles sold – an 80% increase.

Check out the full report here.

Scania is to supply vehicles for the three Germany e-highway in trials that are expected to start next year. The decision was taken on behalf of the German Federal Ministry for Environment, Nature Conservation and Nuclear Safety (BMU), following a public tender process.

Trials will initially commence in Hessen along the A5 Autobahn, where the five-kilometre e-highway infrastructure with electric power supplied from overhead lines in both directions has been completed.

Next will be an e-highway segment on the A1 Autobahn to the Port of Lübeck, with additional stationary charging capacity planned at the port. This highway section is expected to open during summer 2019.

Finally, the third e-highway is expected be established in Baden-Württemberg along a section of the B462 federal road early 2020.

Get all the details here.