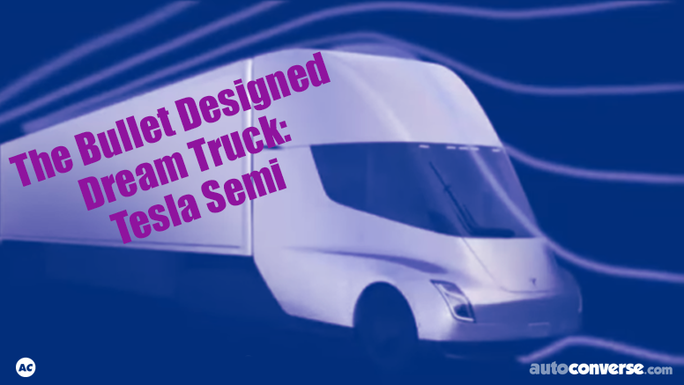 I’m starting to think that Elon Musk gets his newest ideas on automotive and travel innovations based entirely on whatever is annoying him that day. And, apparently, traffic jams and getting stuck behind trucks were big bugaboos in 2017.

He already has a plan to build a tunnel under Los Angeles in order to avoid their traffic and now he’s taking on semi-trucks.   In November of 2017, Musk unveiled the plans for a Tesla semi-truck and one of the first things he pointed out was its acceleration rate.

He first showed how the trailer of the Tesla semi will go from zero to sixty in five seconds.  Impressive, but even trailer-less conventional semis can get up there relatively quickly (his demonstration showed a traditional trailer getting up to 60 within 15 seconds.)  But every driver knows what it’s like to be stuck behind a fully loaded semi-truck.

So how does the Tesla Semi stack up against a conventional truck when hauling?  “At 80,000 pounds gross maximum vehicle weight,” Musk trails off as the animation behind him shows the loaded down Tesla semi easily outpacing the sloth-like conventional tractor-trailer.  “The thing on the left that looks like it’s not moving,” he laughs, “is a diesel truck.”

The Tesla Semi boasts four independent engines, uses less than 2 kWh per mile and can run for up to 500 miles on a simgle charge. Its expected base price starts at $150,000 but it can deliver an estimated $200,000 in fuel savings making it an attractive investment for both companies and independent operators.

Speaking of operators, Musk and his team haven’t sacrificed efficiency for comfort. They’ve moved the position of the driver to a more center location and added enhanced autopilot features that can improve energy efficiency and avoid accidents.  The cabin is loaded with plenty of space for storage with compartments near the floor, in overhead bins and in the doors.

Tesla is currently accepting Reservations for the new semis, with a minimum of $20,000 due to hold a customer’s place in line to buy a model once they are manufactured. Tesla hasn’t released a firm date yet for the first semis to roll out but most experts agree it’s unlikely we’ll see them before 2020.