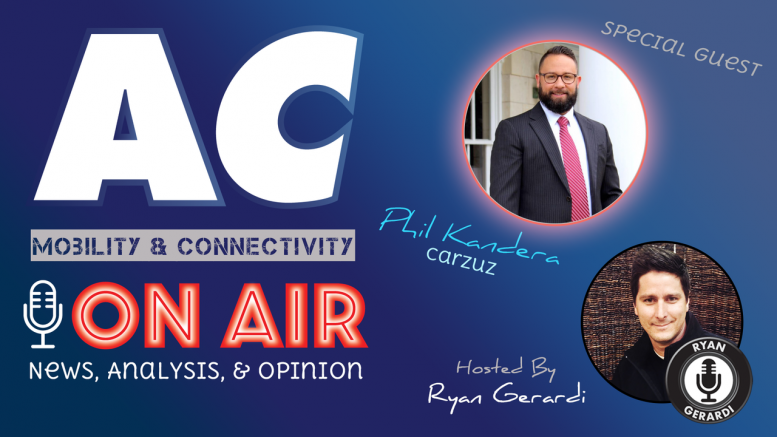 Are flying cars finally here? We open this week’s show with footage of the Terrafugia TF-X, the first fully autonomous flying car. It’s currently under development at Terrafugia in Boston. While the videos and plans look great, the company has been up front about expected release dates which are planned to be in 10-12 years.

This week on the show we sit down with CarZuz Owner and President Phil Kandera, and Massie Center, the company’s Business Development Manager. The two recently launched a show on YouTube called Coffee with CarZuz aimed at car dealers. At the same time, their website is focused on consumers and private sellers. The idea is to bring both sides together and make selling easy for private sellers and car acquisition streamlined for local dealers.

Phil Kandera lays it out for private sellers who want something easy and low pressure.

“Whether you’re looking for just basic information on the value of your car,” he says, “All the way to ‘I’m ready to sell my vehicle and I want to know what an actual offer is’.”

CarZuz teamed up with CarMax to make it happen. They are able to assess your car based on information users input onto their platform as well as photos. Once a car is valued, the user gets a text message with a firm offer that is good for 5 days or 500 miles. No pressure, no haggling, no worries.

Currently, the service is only offered in the San Antonio area but the duo is looking to expand in more ways than one. They are already eyeing up expansion into the Austin area, and Kandera mentioned further plans to incorporate options for using a car as a trade in as opposed to only being able to sell it.

We’ve talked recently about the controversy surrounding CarGurus. Kandera worked on the dealership side for years and was an early adopter of the CarGurus platform. He says he shifted focus shortly after but did make the beginning transitions to their paid platform. When he left that side of the business he was paying a few hundred dollars a month and it was a price well worth it to him for what he received.

It wasn’t until around November of 2016 that CarGurus began making headlines in dealer forums and other communities about substantial price increases. Since then, some dealers have accused the lead generating platform of “price gouging.” Some say CarGurus delivers more leads but others point out lower conversion rates.

Ultimately, it comes down to a question of whether or not a company can increase their prices how they see fit. Is this price gouging?

Watch, Listen, and Chime in with your thoughts…

AutoConverse ON AIR is a live weekly broadcast focused on news, analysis, and opinion related to people, ideas, and the technologies that influence how we are connected and how we get around.

Learn more about the show here and how you can get involved.