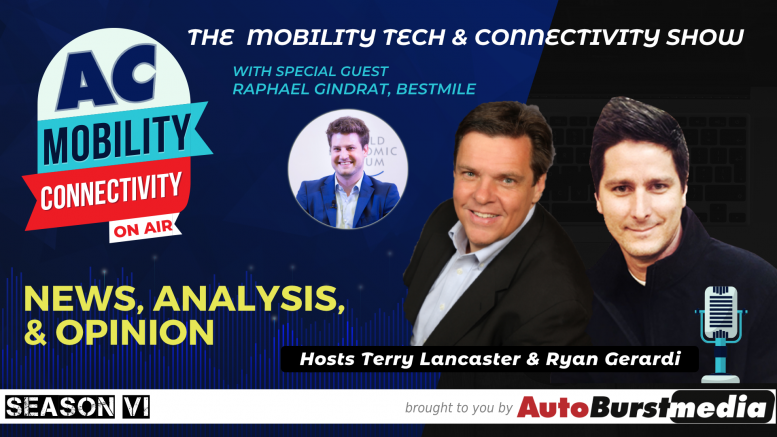 And in a recent white paper by Bestmile, the company takes a deep look at the requirements for true fleet orchestration – the advanced dispatching, ride matching and routing needed to deploy highly optimized mobility services at scale.

The paper also explains how the Bestmile Fleet Orchestration Platform enables this kind of optimization.

Raphael is a pioneer in the world of autonomous mobility. He led a project with the Swiss Federal Institute of Technology (EPFL) in Lausanne to test and operate one of the first autonomous vehicles in Europe and was actively involved in the European project CityMobil2. Raphael is now CEO and Co-Founder of Bestmile, empowers mobility providers to deploy, manage and optimize autonomous and conventional driven vehicle fleets.

Raphael joins us this week on the Mobility Tech & Connectivity Show to talk with us about fleet orchestration and Bestmile’s recent white paper.

Also in the News…

Former Nissan boss Carlos Ghosn has travelled to Lebanon after fleeing Japan, where he faces a trial over allegations of financial misconduct. In a statement, Mr Ghosn said he had not fled justice but “escaped injustice and political persecution”. His lawyer said he was “dumbfounded” by the news and that he had not recently spoken with his client.

It is unclear how the former chief executive officer managed to leave, as he was barred from traveling abroad. Mr Ghosn, who has an estimated net worth of $120m (£91m), was one of the most powerful figures in the global car industry until his arrest in November 2018. He denies any wrongdoing.

The company has been growing its Alexa Auto experience over the past few years. The voice assistant is available with several automaker brands and vehicles, but General Motors was the first automaker to announce it would fully integrate Alexa Auto. In September, GM said it would fully embed Alexa Auto into its vehicles for the 2018 model year and beyond.

How streaming is hurting the planet

The data used to fuel our devices is damaging the environment at a pace that rivals the airline industry, analysts told the CBC. Streaming television and movies, as well as the coming demands of self-driving cars and other smart devices, will require huge amounts of electricity. Much of that comes from the servers they use, which need to be cooled. Computing alone could be using over a 10th of global energy by 2030, according to calculations published in the International Journal of Green Technology.

The show features different guests each week representing companies that influence how we are connected and the way we get around. The show also highlights related news items, current events, and developments.

To learn more about the show and how to schedule a guest appearance, follow this link for more information.