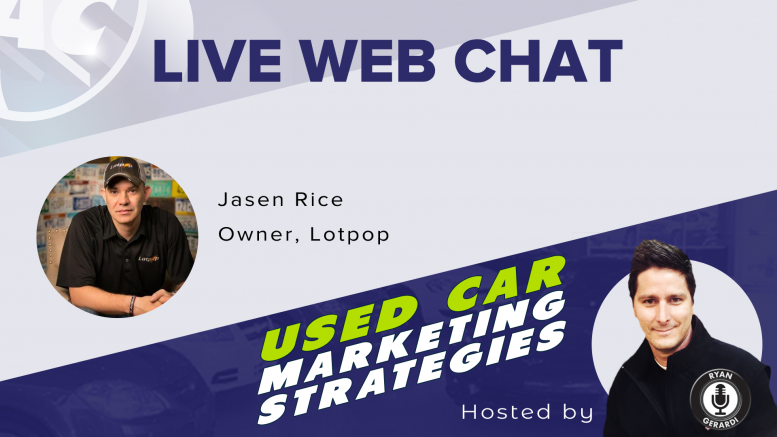 This month in our Used Car Marketing Dealer Strategy Session, we have less of a panel discussion lined up and more of a web chat. Lotpop owner Jasen Rice joins us to talk about Used Car SAAR, rising depreciation, and if you’re lucky, historical sales information, as well.

And in the news right now…

Used-car sales saw only a slight decline last month and the seasonally adjusted annualized rate of sales remains on a steady course, according to Cox Automotive. There was a 0.1% dip in sales volume for used cars in September, compared to an 11.3% slide on the new-car side.

The overall used-car SAAR for the month was 39.8 million, which was flat month-over-month and up from 39.7 million in September 2018, the company said.

Separately, there’s also a metric termed “used retail SAAR,” where Cox Automotive takes out private-party sales and only considers franchised and independent dealer sales. That SAAR measure came out to 20 million units last month, steady with August and up from 19.6 million in 2018.

The latest reading of used car sales projections shows a fairly strong market, including the certified pre-owned segment of the industry.

ALG is expecting the third quarter will wrap up with 10.26 million pre-owned sales for the quarter. While that would be off 3.9% from the second quarter, it would be a 1.8% hike from Q3 of 2018.

The auto retail veterans behind Fair, the used-vehicle leasing subscription service, continue to attract investors willing to put capital into the startup’s effort to revolutionize the way consumers acquire vehicles.

Fair uses its debt facility, which functions through a subsidiary, to buy vehicles for its consumer business as well as for its partnership with Uber.

As part of the deal, Ally is making an equity investment in the company, according to Fair. The subscription platform would not disclose the amount but said Ally will become a minority shareholder in Fair.

After a big jump in used-vehicle sales in 2018, Costco Auto Program expects those sales to keep growing — perhaps even double in 2020 — as more automakers contact the company about offering Costco promotions.

With the volume of off-lease vehicles expected to peak this year, Costco Auto Program, which offers discounts to Costco members on new and used vehicles, is forecasting sales of 110,000 used vehicles in 2019. That would represent a 5.8 percent gain from 2018.

Used-vehicle depreciation is expected to climb this year as the factors that helped keep it at a lower rate in 2018 appear to be petering out.

Relatively low interest rates, good credit availability, high job growth and tax cuts all came together to put the used-vehicle depreciation rate at 12.4 percent in 2018, compared with 13.2 percent in 2017 and 17.3 percent in 2016, according to data company Black Book.

“We kind of hit a peak on some of these factors that made depreciation very low,” Anil Goyal, Black Book’s executive vice president of operations, said of the 2018 rate.

Black Book expects the rate, which measures annual depreciation on 2- to 6-year-old vehicles, to grow to 15 percent this year, Goyal said, as the favorable factors from 2018 cool off.

For residual values, the other side of the depreciation coin, TrueCar’s ALG, which tracks 1- to 5-year-old vehicles, expects a consistent decline of about 0.5 percent annually over the next three years.

Online used-vehicle retailer Carvana Co. continues to report losses as it carries out a rapid expansion strategy, but revenue and retail vehicle sales soared in the second quarter. Carvana’s stock price shot up after the report was released Wednesday after the market’s close, and rising as much as 26 percent at one point in early trading Thursday.

The retailer’s shares surged 25 percent to close at $72.47 on Thursday. The retailer’s stock closed at $57.91 Wednesday and reached as high as $73.22 Thursday morning.