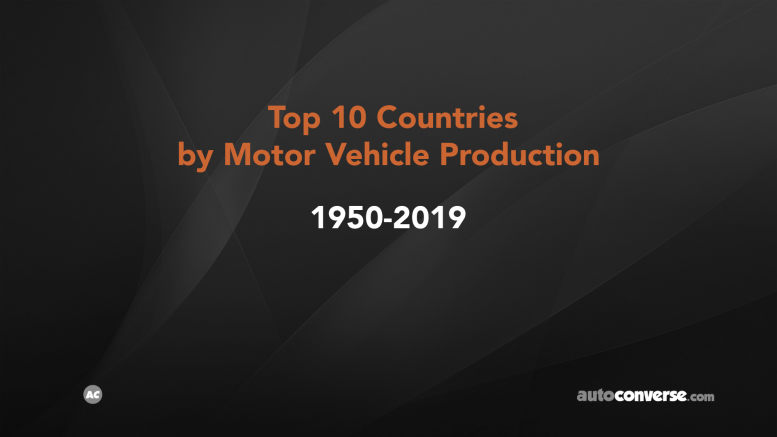 Here’s a fun handy video for you – the Top 10 Countries by Vehicle Production from 1950-2010. Figures include passenger cars, light commercial vehicles, minibuses, trucks, buses and coaches.

Be sure to catch the decade-by-decade breakdown below.

The USA started off in the lead with just more than 8 million units being produced in 1950, with the UK in second at just under 785k units, and Canada in third at under 4k. In fact, all countries combined in 1950 equated to about one-third of US production.

As Canada remained stagnate on its volume, France, Italy, and the USSR all ramped up production, with France surpassing 1 million by 1958, making it only the fourth country to cross the 1M mark. The USA by this time had actually slipped under the 8M level.

By 1960, Japan was getting into the game, quickly rising from about 300k per year to surpass the 1M mark in 1962. And by 1964 Japan had crossed the 2M mark, putting the nation in third most units behind only Germany and the USA who by now was back over the 8M level.

While all countries were rabidly increasing their production, Japan rose to the number two spot by 1966, surpassing Germany at 3M units. France by this time was the fourth largest producer at just over 2M units, neck-in-neck with the UK.

From here the race was on with the top 5 nation players firmly stationed in their positions.

By 1970, Japan was producing more than 5M units a year, rapidly chasing down the USA which still remained at or near the 8M unit level. Germany was at 3.8M, France at 2.7, and the UK at just over 2M.

Nothing could seemingly slow down Japan which by 1976 had overtaken the USA with more than 8.2M units. Germany and France by this time were at about 50% the production levels of the two world leaders.

As Japan’s numbers climbed to more than 10M units by 1979, USA production levels were dropping. In fact, USA production dropped almost below 8M by 1980 before going back up. By this time, Japan was producing more than 11M units a year.

By 1985 the world’s top car producers were all growing at about the same relative steady pace. Spain was in the global game now at just more than 1M units, and Brazil had dropped off the top 10 list.

It wasn’t until 1991 that the USA had reached the 10M level. And in the process of doing so had significantly ramped up its production levels, putting Japan on its heels for the first times since taking the crown in 1976.

By 1995 the USA was churning out more than 11.5M vehicles each year, overtaking Japan who had been declining since the early 90’s, now at under 11M and dropping almost under 10M by 2000.

Japan had certainly turned things around in the early 2000’s but by now a new producer had entered the fray – China, who snagged the number 4 spot from France by 2003 with more than 3.5M units produced, and no indication of sitting still.

By 2006 China overtook Germany for the number 3 spot and was producing more than 6M units a year.

In fact, China’s production levels were so intense that by the end of 2008 the country was producing more than 11M units a year, and growing steadily, knocking the USA and Japan down to the number two and three spots, both of which were now under 11M units.

By 2010 China was making more than 16M vehicles a year, and just under 19M by 2011, with the USA and Japan both floundering at around the 8M level.

In 2012 the USA found ways to increase its output levels while Japan remained steady. The USA had reclaimed the number 2 spot, but neither nation was a match for China who by 2019 has been producing more than 28M units a year.

Let us know your comments below…