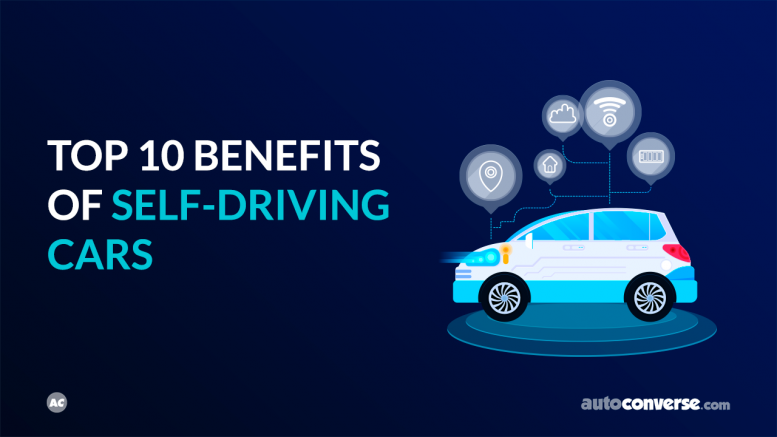 Editor Note: The views and opinions presented in this article do not necessarily reflect those of the Editor.

With smart devices now all around us, a new and attractive innovation in the form of self-driving cars is finally becoming a reality. In some cities, they have already begun hitting the roads.

Whenever a new concept is introduced that is as disruptive as self-driving vehicles, its pros and cons are always discussed and analyzed in detail. Let’s look at just some of the ways that driverless cars can improve the quality of our lives.

Most driverless cars to be introduced in the future will be electric vehicles. We can almost certainly classify these vehicles as ‘green’.

Technology used in self-driving cars ensures that fuel consumption will be optimized. This should result in dramatically reducing emissions. The driving protocol of autonomous cars guard against excessive speed and avoid repeated braking and re-accelerating, reducing the amount of emissions released into the atmosphere compared to a vehicle driven by an infallible human.

It may be some time before self-driving cars are widely accepted in our transport systems and seen for sale at buy here pay here auto dealerships. But as self-driving cars become more popular and networked, the number of road crashes will decrease. The chance of human error due to distraction or drunk driving is minimized, saving millions of lives and millions of dollars.

Self-driving cars are expected to save precious lives that are lost every day due to excessive speeding or driving under the influence of alcohol. Estimates indicate that nearly 1.3 million people lose their lives in road accidents worldwide every year. An autonomous car does away with manual controls and eliminates fatalities caused by human error.

We may see cities move to a system where people no longer usually own cars, instead calling up the use of a self-driving car only when they need it. Cars would be pooled together as a public service. There would be no need for car garages, and people would no longer need to worry about ongoing maintenance and repair of their own vehicle.

Many people are unable to drive a vehicle because of age, disability, or restricted mobility. They cannot procure a driving license, and can find themselves feeling isolated. Fully-automated cars prove to be a boon for such people, allowing them to reclaim their freedom while ensuring that lives will not be endangered.

One of the biggest advantages of driverless cars that we can foresee is a dramatic reduction in traffic jams that account for delays in commuting. Self-driving cars will be able to communicate with other cars on the road. As braking functions can be fully automated, nose-to-tail crashes can largely be avoided. Cars will travel at safe distances from one another. Speed limits can also be increased as we gain higher confidence in our vehicles.

6. Better Use of a Driver’s Time

Normally, a driver has to be very alert when driving a car. While commuting to and from work, he has to focus entirely on driving. With self-driving cars, the passenger can gainfully utilize the time spent commuting.

According to estimates, urban American drivers spend nearly seven billion hours in traffic, wasting up to 3.1 billion gallons of fuel, resulting in a loss of about $160 billion from traffic congestion.

Self-driving cars can access digital maps, real-time and accurate traffic data. Using this data, they will efficiently select the best possible route. The obvious benefits that would result are less traffic and congestion, with decreased wastage of fuel and time.

resent day parking lots have to provide ample space in between vehicles to facilitate parking and taking out of vehicles. Self-driving cars will be able to park themselves without needing so much space. Around 15% reduction in parking space is expected with driverless cars. Smaller parking lots mean better use of the building space.

There is ample scope for trying out new designs in driverless cars, as there will be no need for complicated driving tools meant for human drivers. Improved interiors with arrangements for relaxation and entertainment will make them a mobile living room! As fewer complex mechanical parts will be required, prices of vehicles should drop, making buy here pay here financing even easier to get.

Since driverless cars could run at much higher speeds, they would require more powerful and efficient engines. The mechanical parts could be re-positioned in a more advantageous manner.

We would have safer streets, less pollution, and almost no parking woes. Looking at these environmental and economic advantages, self-driving cars seem to be a viable and attractive option for our future transportation needs. However, they are still in an early stage of development. The safety features are yet to be comprehensively tested and there is a lurking distrust of self-driving cars in the minds of some of the public. This will go away when such vehicles become more and more operational on the roads.