The 2010 LA Auto Show gave birth to many unique automobiles, including a wide array of eco-friendly vehicles and concept cars weighing less than 1000 pounds.  Appearing in the challenge for best auto under 1000 pounds was the Volvo Air Motion, a lightweight vehicle utilizing green vehicle technology and weighing in at only 902 pounds, more than enough to qualify for the category.  Stripped down in order to lower the vehicle’s weight, the Volvo Air Motion is composed of carbon fiber, making it extremely expensive to make. 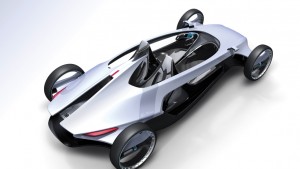 The Volvo Air Motion is another air-powered vehicle that drives using compressed air, an advantage where air conditioning is concerned, because the air automatically cools as the vehicle drives.  Compressed air, one of the numerous options for alternative fuel travel, utilizes built-in air tanks to power the vehicle, and could be replenished at air fueling stations.

One of its competitors, the Honda Air, weighs in at only 800 pounds and was inspired by roller coaster systems and wing suits.

Although it is a lesser-known alternative fuel, air power made a strong showing at the 2010 LA Auto show, perhaps signifying its entrance as a legitimate, feasible alternative fuel.  Some signs point to electric vehicles as the most likely alternative fuel vehicle, but air power is certainly an option that may gain momentum in the coming years.