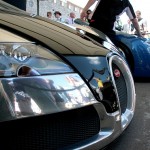 It’s been over a hundred years since the first cars started rolling off of Henry Ford’s assembly line. Since then, cars have come a long way. The most high-tech cars in the world come with some impressive specs and stylish amenities. Another step up from the days of Henry Ford is the engines found in each of these cars. Regardless of how far technology has come, one thing remains the same. A well-made production car is a thing of beauty.

The Bugatti Veyron 16.4 Super Sport boasts 1,200 horsepower with torque at 1,106 pound-feet with a rear mid-16 cylinder engine. Each cylinder in the engine has four values (sixty-four in total) with a narrow staggered V8 configuration. The result is two overhead camshafts that function to drive two banks of cylinders. Consequently, just four camshafts are required. The transmission is a computer-controlled automatic featuring seven gear ratios. Magnesium paddles behind the steering wheel help to reduce the shift time to approximately 150 milliseconds or less. Braking is accomplished via drilled, radially vented carbon fiber reinforced silicon carbide composite discs.

This Swedish mid-engined roadster features a 4.7 L twin-supercharged V8 with a 6-speed manual transmission. A 356 aluminum that has gone through a special type of heat treatment producing rapid precipitation strengthening is used for the engine block. Two centrifugal superchargers provide a noticeable engine boost. The engine is designed to run on regular petrol or E85 Biofuel, producing an increase in torque.

Prominent features include a 7.0 L naturally-aspirated V8 engine and 6-speed manual transmission. The car’s body is made from carbon fiber. Spoilers, scoops and additional aerodynamic features are incorporated in the design of the body to yield a split-channel airflow that exists throughout the car. Essentially, the car acts to create its own weight in downforce. As a result, in theory, the car can be driven upside down. Two Garrett turbochargers have updated the engine in the latest model. Diffusers and the rear spoiler have been re-designed, resulting in a 60% increase in downforce.

An early pre-production model set the record for fastest road car in the world in 1998. The production model feature a 60° 6.1 L BMW S70/2 V12 engine and 6-speed manual transmission. While not official, some consider it to the fastest production road car as well. The engine itself is naturally aspirated, resulting in better driver control. Carbon fiber body panels and monocoque in engine compartment required increased heat insulation. A specific goal of this car was to boost performance via high-tech methods while not requiring an increase in the skill level of the driver.

Key features include a rear mid-engine and rear-wheel drive layout. Technological updates include a lightweight carbon fiber high performance intake system. Innovative technology in the design of the chassis where the sills are not strengthened results in a body that is more rigid without putting extra weight on the car. Instead, the firewall structure of the chassis tub is re-enforced using billet alloy braces connecting specific points where the roof rails would normally have been joined. However, the windscreen is re-enforced for safety reasons. Canvas side curtains and a removable carbon fiber roof are additional designs to keep the overall weight light to increase speed.