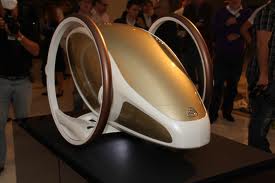 Inspired by modern architecture, infrastructure, and nature, the DRS delivers a light design and is pedal-powered, essentially acting as an electric-powered rickshaw, which was inspired by the human-powered rickshaws that appeared in Tokyo around 1870.

The world’s first Naturally Manufactured Vehicle (NMV), the DRS is created using organic intelligence and advanced bio-mechanical engineering, which work together to bring to life the vehicle’s ultra-lite composition.

Utilizing a self-balancing electric drive, the Maybach DRS is intended to be refueled at charging stations located throughout a city’s transport infrastructure.

In addition to electric, ultra-lite seems to be the way of the future, and many prototypes at the LA Auto show hit the scene with sub-1000 lb. vehicles.  The future also seems to lean toward smaller vehicles, with smaller engines and less, if any, trunk space.  Although the reality of prototypes such as the Maybach DRS may be years off, the vehicle may represent the future of automotive design.