Electric vehicles have arrived in the U.S., but Americans didn’t throw a party. The Dutch, however, threw a party to celebrate the EV. 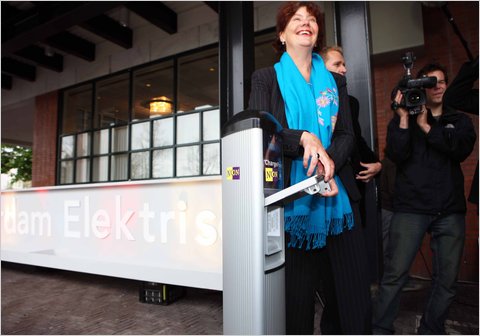 The party, Mr. Cherkaoui said, “communicates something new in a fun, very Amsterdam way,” adding: “The city is always ahead of the curve in terms of being green. This is creating a buzz that will lead people to check it out.”

That’s pretty Dutch. In the U.S., if there was a party to celebrate electric vehicle technology it would likely cost party-goers $1,000 for a plate of food and the privilege of hearing a well polished marketing message. And the most likely heard phrase among attendees would likely be, “Let’s go Dutch.”

I don’t think it would quite have the same connotation as the free party in Amsterdam. At any rate, we can still celebrate electric vehicle technology even if we do it a different way.