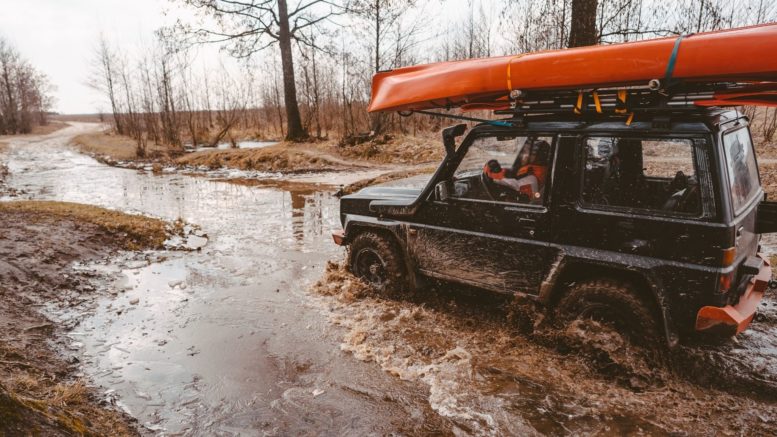 As motorists and as human beings, our relationship with water is sometimes more fraught than it should be. We often deal with flooding on the roadways from extensive rainfall and levee breaches. The threat of hydroplaning or driving into standing water can make roads impassable.

Some makes and models, however, are better than others at handling water hazards. In fact, for off-road enthusiasts, wading through water is part of the thrill. Whether you’re just dealing with it or challenging it head-on, here are some of the best vehicles for driving through water.

Honda’s contribution to the off-road market has been a successful one. The CR-V can handle up to a foot of water on and off the highways, imbuing it with superior versatility. While the CR-V, like many off-road-capable vehicles, can handle standing water, you shouldn’t attempt to drive through rushing water with this or any other vehicle—the force of that water can damage sensitive components.

The general-purpose nature of the Jeep Wrangler makes it well-suited to handling a little bit of water buildup on the streets, but where the Wrangler really shines is off the pavement. When it seems like a river or stream can thwart the progress of your off-road adventure, fear not—a high suspension and all-terrain tires can power through the water and cross that shallow stream. Drivers will attest that it’s part of what makes driving a Jeep so special. Better yet, the Jeep’s water-resistant interior means that it can take some splashes without sacrificing the upholstery. Flooding has totaled many makes and models, but usually not this one.

The Jeep’s war-forged cousin from across the pond, the Land Rover is another of the best vehicles for driving through water, even as extensive retooling for the global market has represented a departure from the classic British Defender. If you’re fortunate enough to get your hand on one of these exports, you can drive with confidence, handling about 900mm (about 35 ½”) of water on and off the roads. The Range Rover can also handle almost three feet of standing water, but let’s be honest—if you’re paying for a Range Rover, you’re not putting it to the test like that.

Moving back to domestics, we’ll close out with the Chevy Trailblazer, an SUV that doesn’t have the off-road pedigree of others, but still has the capability to handle about a foot of standing water on the roads. If you live in a flood-prone location where driving is still essential, getting behind the wheel of a Trailblazer can help you deal with some of that accumulation. If you’re on your way to a camping trip, the Trailblazer can cross some of those babbling brooks with no problem.