Peuget’s new electric concept car, the Aureon, is the latest in a line of futuristic vehicles to reveal themselves to the automotive industry.  The Aureon is a three-wheeled vehicle with a large see-through body and two seats.  The lights of the Aureon are located on the wheels, which are a unique design, and it is not very large, comparable to the Smartcar, which will make parking a much easier task.  The hubless, florescent red tires, in addition to the sleek design, give the Aureon a fashionable look which many say resembles a dragonfly.  In actuality, the vehicle was inspired by the shape of an ant. 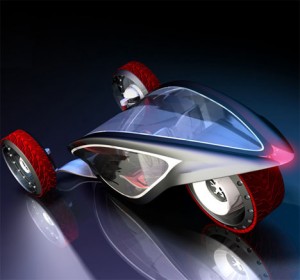 It seems like all cars these days, whether concept or reality, are leaning towards electric power.  Although there was initially a great deal of talk about hydrogen-powered vehicles in the future, a direction some European countries have started in, it appears the US will be focused on electric vehicles, and companies are vying for a spot to install electric charging stations throughout the country.  Despite low costs and zero emissions, the downside of the electric vehicle is long charge times, which could be a significant hindrance on long car rides.  Nonetheless, electric vehicles are here in a big way.