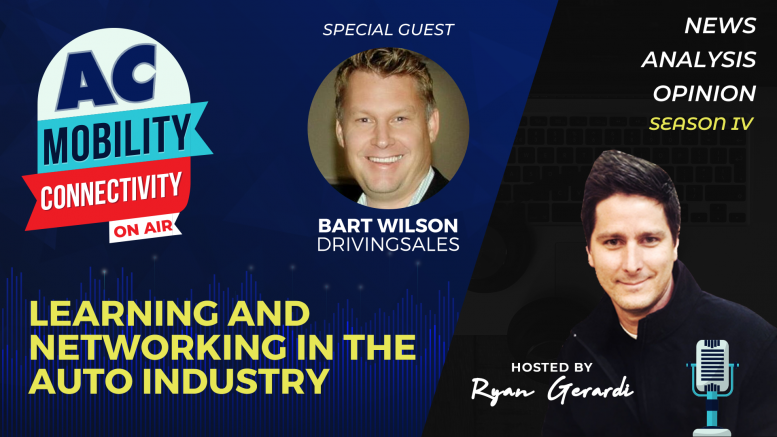 This week on the Mobility Tech & Connectivity Show it’s #RangerDay. Around the globe, park rangers are on the front line in the fight to protect our natural heritage. World Ranger Day offers a chance to support their vital work, which ranges from environmental campaigning to education. The day is also an opportunity to pay tribute to rangers who have lost their lives in the line of duty.

Also on the docket…

Our special guest this week is DrivingSales Director of Operations Bart Wilson, who has been with the auto industry’s largest employee network for more than 10 years, and who is preparing for the 2019 DrivingSales Executive Summit. We will be talking with Bart about this upcoming event being held in October, and why fixed ops managers need to experience DSES.

Go here to RSVP on Facebook if you’re watching

The Mobility Tech & Connectivity Show is a weekly webcast where we explore people, ideas, and the technologies that influence how we are connected and the way we get around. It is hosted by me (Ryan Gerardi) and streamed live on the AutoConversion YouTube channel (subscribe now). The show is recorded and then featured on the AutoConverse Podcast.

For information on how to participate in the show or to appear as my special guest, follow this link. For sponsorship information contact me directly. Thanks.

Tesla CEO Elon Musk said that car owners will be able to stream Netflix and YouTube from in-car displays “within a few months.” Streaming would only work while a car isn’t moving, similar to how games currently work in Teslas. Tesla’s work with streaming is dependent on regulators approving self-driving, which Musk previously said he expects to happen this year.

For years, Tesla Inc.’s Elon Musk loved his chain of store and service centers. Quarter after quarter, the carmaker kept adding more, even waging legal battles to set up shop in states where dealers tried to block him.

That changed suddenly in February, when the chief executive officer declared he was all but giving up on the retail store model. Most locations would be shut down. Ten days later, he reversed himself: Only about half that number would be shuttered. In the months since, Tesla has proceeded to keep all — or almost all — of them open.

Now, in a new twist that essentially brings Musk right back to where he was at the start of the year, he’s growing Tesla’s chain of brick-and-mortar locations again by adding service centers. The abandonment of this cost-cutting effort isn’t helping profitability — the electric-car maker’s shares plunged again in the wake of a worse-than-expected quarterly loss.

More emphasis has been put on the service and parts departments recently than ever before. While there have been huge strides forward, it seems like fixed ops management is expected to have answers for every problem from the moment they take the hot seat.

It’s different for sales management, GSMs and dealer principals. The variable side is fluid and ever-changing, requiring continuous personal and corporate learning. The bulk of attendees to automotive retail training and seminars like DrivingSales Executive Summit is from this group.