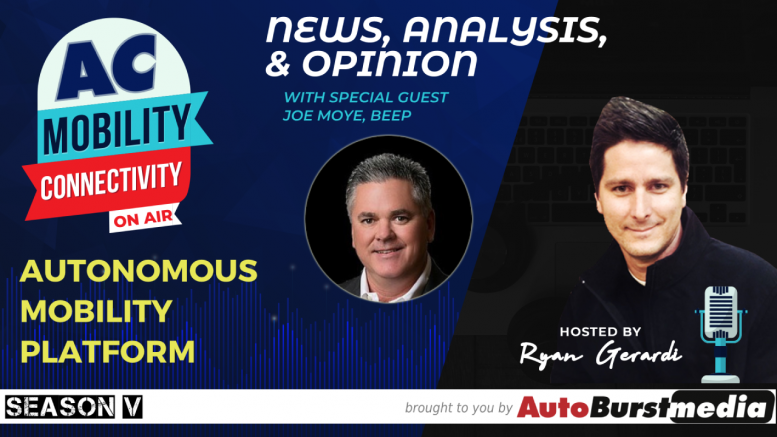 Autonomous shuttle platforms are advancing quickly. Not just to react, but to perceive their environments and respond accordingly to random and unexpected situations, which are mostly induced by human drivers.

Additionally, machine learning advancements are improving safety and rider experience every day these autonomous testing vehicles are on the road. The low speed, geofenced, multi-passenger solutions in production today will greatly impact the future all autonomous vehicles.

One such company that is playing a part in this (r)evolution is Beep, Inc., which delivers next-generation services for passenger mobility to fleet operators in planned communities and low speed environments across the public and private sectors, including transportation hubs, medical and university campuses, town centers and more.

In this episode we talk about autonomous passenger and fleet mobility with Beep, Inc. CEO Joe Moye. Leading up to the conversation, Orange County Florida had just been awarded a $20 Million Federal BUILD Grant to “reimagine mobility in the region,” and Beep, Inc. was part of the reason this grant allocation had come together.

Boeing said on Monday that it expected to resume delivering 737 Max jets to airlines in December. The deliveries would begin after the plane receives primary certification from the Federal Aviation Administration but before it is fully cleared to fly again, a new Wall Street Journal report said. The plane maker said it completed a simulator test of the plane’s redesigned software with the FAA, a crucial step toward certification.

Fiat Chrysler Automobiles NV and Peugeot maker PSA Group of France agreed to a nearly $50 billion merger that, if concluded, will mark one of the biggest auto industry consolidation deals in two decades.

By negotiating the deal, FCA Chairman John Elkann is acting on a lesson passed on from the Italian-American car maker’s longtime Chief Executive Sergio Marchionne, who died last year: Merge and grow, or fade into irrelevance.

Caterpillar’s autonomous and remote-controlled mining equipment could very well find itself on the moon when NASA is scheduled to return to the lunar surface in 2024. Operator-less drilling and digging machines will mine water, oxygen-rich rocks and moon dust for use in 3-D printing of various materials. This is part of CEO Jim Umpleby’s goal to grow Caterpillar’s digital and autonomy businesses as a way to develop new profit streams for the company.

All of the island’s western area now has been designated a trial site for autonomous vehicles, spanning more than 1,000km of public roads, as the government looks to address industry calls for a more varied test environment.

The industry regulator said the designated test site within which makers of autonomous vehicles could apply to run tests would extend beyond current sites, such as Buono Vista, Jurong Island, and Sentosa, to cover the entire western area of Singapore. This would allow for on-road testing of a wider range of road conditions and traffic scenarios.

The Mobility Tech & Connectivity Show is a live weekly webcast where we feature different guests from week-to-week and explore ideas and technologies that influence how we are connected and the way we get around.

The show is conducted via Zoom webinar and streamed live on YouTube. It is recorded and then featured on the AutoConverse Podcast.

For more information about the show and how you can get involved, follow this link.