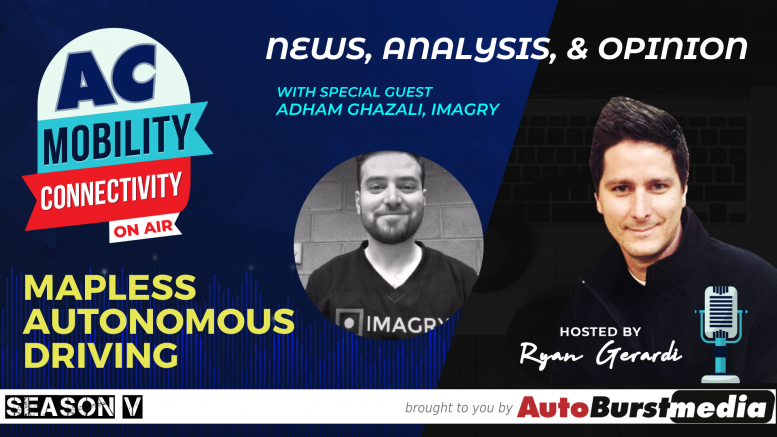 Right now, the customary way to fully operate autonomous vehicles is to use HD mapping that requires a strong connection to satellite GPS and continuous effort to update the map. But can autonomous driving can be done without the need for this costly and time-consuming technology?

And to discuss we welcome Adham Ghazali, Founder & CEO of Imagry. Ghazali is a deep-learning entrepreneur, engineer, and inventor who has invented and applied several learning techniques to a large spectrum of problems, including computer vision, brain-computer interfacing, EMG motor signal analysis. Currently, Ghazali is building the Large Scale Platform for image and video classification.

Food delivery firm Starship Technologies is planning to roll out its autonomous delivery robots to 100 college campuses across the U.S. by 2022, Axios reports. Starship’s cooler-sized bots are already milling about George Mason University in Virginia and at Northern Arizona University. With their self-contained, pedestrian-friendly campuses and concentrated populations with limited kitchen access, colleges make for ideal testing grounds for autonomous delivery. And for companies like Starship, getting approval to operate on a campus may come more easily than making a case to a city council.

With the number of vaping-related illnesses doubling in the past week, the Centers for Disease Control issued a warning Friday to avoid products that could be contaminated with marijuana component THC or other adulterants. The CDC, along with the Food and Drug Administration, issued a statement saying e-cigarettes should not be bought off the street or modified to add any substance. The alert follows one death and dozens of hospitalizations in recent weeks related to vaping. Other federal and state officials are urging Americans to stop using e-cigarettes altogether until the reactions are better understood.