Premiering at the Los Angeles auto show this month, the Honda Air demonstrates new possibilities in alternative fuel.  Powered by a compressed air and pneumatic regulator system, the Air utilizes a lesser-known alternative fuel – air – to propel the vehicle.  The vehicle was inspired by roller coaster systems and wing suits and can travel an estimated 100 miles before requiring a refuel.

One of numerous eco-friendly vehicles at the Los Angeles auto show, and a top contender for the show’s green award on November 18th, the Air weighs in at just 800 pounds and is designed for maximum open air experience.  The Air can be refueled easily at gas station air filling stations or at home using an air compressor. 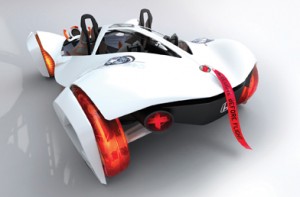 Increased competition for the green award at the auto show from automakers such as Mercedes Benz and Maybech show the great interest in alternative fuels.  While more commonly-known alternative fuels such as electric and hydrogen seem to be leading the way, Honda’s air provides yet another option – air.  Only time will tell which fuel eventually becomes the standard for the future automotive industry.