With growing gas prices and the worst economic crisis in 60 years, many are wondering what the solution to transportation issues in the U.S. may be.  Increased traffic congestion is a glaring sign that something needs to be done, and many feel that high-speed rail systems may be the solution.  Economically friendly high-speed rail systems could bring a second boon in the transportation industry in the United States, which first experienced increased growth in 1940, when the first freeway was built in the LA area. 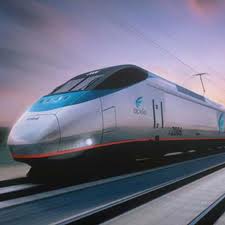 Considered one of the factors that sent the economy over the edge, gas and dependence on foreign oil is a major topic among economists these days, and the U.S. is scrambling to create alternative fuel sources and vehicles, including hydrogen-powered vehicles and electric vehicles, which seem to be the next step after hybrid vehicles and are possibly the most likely source of travel in the automotive industry.