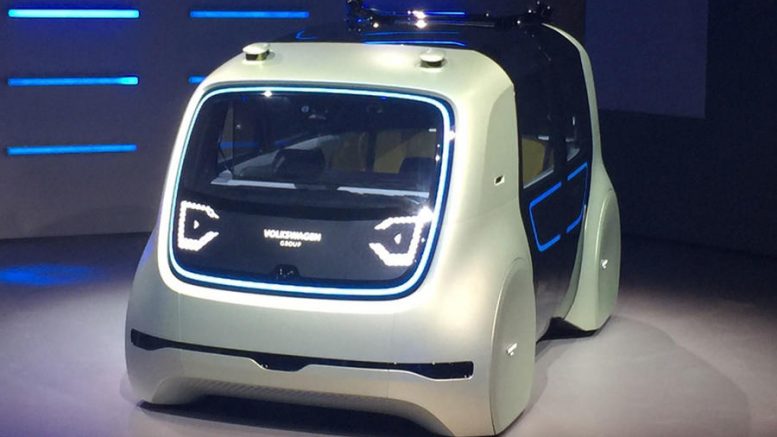 The New VW Van – Cedric the Pissed Off Toaster (The Verge)

This is Cedric, Volkswagen’s newest concept for the future of autonomous driving. Cedric (as in self-driving car, get it?) is fully autonomous, meaning it has no steering wheel or pedals, and it can be summoned at the push of a button for ride-hailing trips, a la Uber and Lyft.

VW claims that Cedric is the first vehicle to be designed for fully autonomous driving “from scratch.” Of course, it’s important to note that Cedric is just a concept, meaning it does not exist anywhere but in the imaginations of a few VW engineers and designers. Which may explain why Cedric looks so angry. Cheer up, Cedric! Maybe someday you’ll be a real car.

Check out the AutoConversion interview with Volkswagen at the Chicago Auto Show over at our Facebook page.

George Hotz – aka geohot – is a well-known hacker.  While you might not recognize the name, chances are you remember the headlines he made back in 2007 when, at the age of 17, he became the first person reported to carrier-unlock an iPhone.  In 2009, Hotz began a campaign against Sony which culminated in 2011 when the company actually filed a restraining order against him just to stop him from continuing to hack and share exploited code for their PS3 system.  Just recently, Hotz has turned his attention to autonomous driving and had already begun to make headlines after he taught his Acura ILX to drive itself.

So when Holtz put in an order for a Tesla Model S with the latest HW2 sensors, their Legal Department decided to reach out before filling the order.

EVgo, a network of electric car charging stations, announced yesterday that it deployed the first so-called high-power fast charging station in Fremont, Calif. The station uses a system made by ABB to provide a maximum charging rate of 150 kilowatts, compared to the 50-kW units available today. That will mean much faster roadside pit stops for EV owners, particularly those driving cars with large long-range electric cars. The current public quick chargers can provide roughly three miles per minute of charge, while a 150-kW charger can provide nine miles per minute.