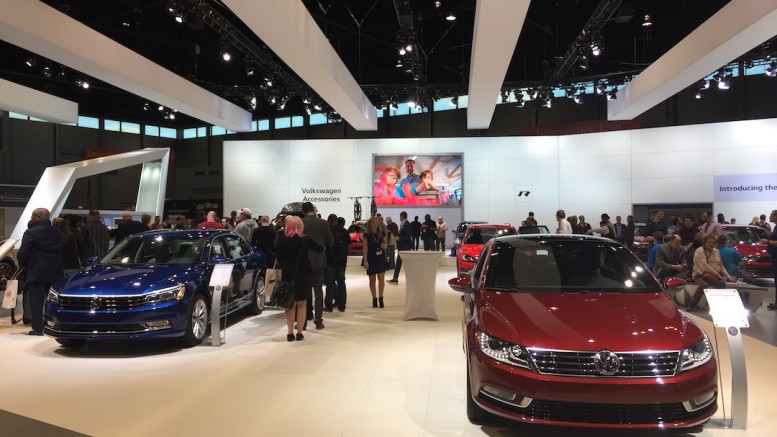 For the third consecutive year I was able to participate in the Chicago Auto Show. The last two years I was involved with managing a content marketing program for the CATA which is the organization that puts on the nation’s largest auto show. This year however I had no obligations and had the floor to myself…well, not literally.

Unfortunately, I had extremely limited time to actually be on the floor engaging with exhibitors. I didn’t arrive until about 11 and the floor was only open until 3 because of the First Look for Charity Ball later that evening. Unexpectedly, the product people on the floor all disappeared by 2, so I ended up being in the expo halls for less than three hours.

During that time I was able to hit seven exhibits and capture footage on Snapchat using my “old faithful” Sony HD 1080i. Here’s the Snapchat story I made.

Doing this gave me some good ideas for next time, so now I’m anxious to hit another auto show.

My strategy on the floor was to find out what the most progressive feature or carline was at each exhibit. Responses and interest levels varied from exhibit to exhibit. None were permitted to be on camera with me, except for Maggie at the Toyota exhibit who helped contribute a terrific interview, much of which is featured in my video below.

The first exhibit I hit was VW, as a favor to one of my dealer friends who was not able to attend. As it turned out, the VW exhibit was the only one that was actually buzzing. They were serving food for everyone and I don’t mean snacks but grilled hot dogs and hamburgers, and desserts too.

At the VW exhibit I had a product specialist demo Apple CarPlay for me in a 2016 Golf GTI. VW’s integration is called App-Connect and while you can use CarPlay with Bluetooth, you must be wired in to utilize full benefits. This appears to be the case for all car makers, not just VW.

According to the product specialist, VW is one of few automakers offering CarPlay as standard in just about all its models, but reality is that CarPlay is here. From what I could gather, CarPlay and Android Auto will be available in just about all models across all makes over the next 2-3 years.

Next door was Mitsubishi where I learned that the 2017 Mirage would be one of the few vehicles to support both Apple CarPlay and Android Auto. That was the most innovative thing they had for me.

Hyundai’s main showcase was its 2017 CUV class which included a Tucson and two Santa Fe trims. This line features some cool new stuff including automatic adjusting high beams, automatic lift gate, autonomous emergency brake (in the event you are about to hit a person or another car). Additionally, these vehicles will be supporting both CarPlay and Android Auto.

In the Hyundai exhibit was Genesis, which in 2017 will be its own luxury class. No more Hyundai Genesis or Equus.

Chevrolet had something new to offer. In addition to CarPlay, the 2016 Malibu offers a feature on its MyLink system called Teen Driver, a parental control system. With Teen Driver, parents can set limitations such as audio volume, top speed, and seat belt requirements. The system logs all activity during the teen’s drive and creates a report card for parents. It also alerts the teen driver when breaches occur.

One exhibit I was anxious to see was Volvo, but excitement dissipated moments after talking with the only product specialist there who didn’t appear to know much (or be willing to educate me) about Volvo’s product. She actually referred me to Volvo’s press kits online, which I quickly downloaded to educate myself on the fly about the XC90, which I already knew was a state-of-the-art marvel.

The XC90 sports Pilot Assist, which enables the vehicle to safely keep up with the flow of traffic at speeds of 30 MPH or more. Whether or not it changes lanes autonomously I am not sure. The XC90 also supports automatic sport, luxury, and comfort modes, and it’s front seats are collapsible in an accident to help prevent spinal injury.

By and far the most progressive exhibitor I visited was Toyota. Not only was there a product specialist permitted to do media with me, but the car maker also had a lot of progressive technology to boast.

In my video you will see Maggie and I talking about the 2016 Mirai, the world’s first mass produced fuel cell vehicle for sale in consumer markets (California for now). This vehicle emits nothing but small amounts of water and gets more than 300 miles per fueling. And unlike electric vehicles that take hours to recharge, the Mirai fuels up with hydrogen fuel in minutes like any carbon combusting vehicle does. Be sure to watch what Maggie talk about in the video related to the Mirai’s general “intelligent” body design and the Back to the Future look.

Also at the Toyota exhibit, which I believe were present last year as well, was the iRoad and FV 2. These concept cars say a lot about how Toyota engineers envision the future of driving in urban environments.

Call it a Wrap

As you can see, Apple CarPlay and Android Auto are here! Many 2016 models feature one or the other. Many 2017 models will support both. Over the next few years these systems will likely exist in just about all models.

Autonomous driving features are also being introduced rapidly, helping to make driving safer while also more convenient, not just for drivers but for everyone on the road.