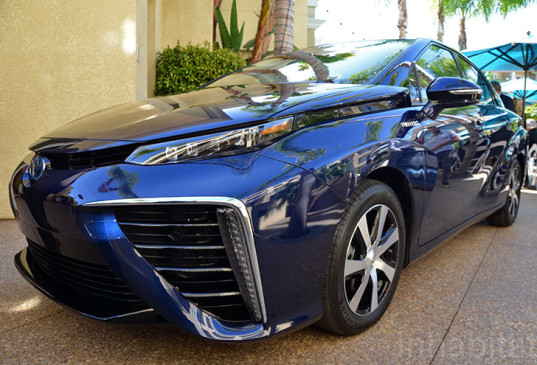 While not the most elegant of vehicles, the Mirai promises to be relatively fuel efficient, offering more range than the recently released Hyundai Tucson fuel cell (up to 300 miles versus 265 for the Tucson) despite having lower tank capacity (11 pounds of hydrogen versus 12.4 for the Tucson).

The energy content of the 5 kilograms of hydrogen fuel is roughly 165 kilowatt-hours, or almost double the capacity of the largest battery pack in a production electric car. That’s the Tesla Model S with the 85-kWh battery.

Tesla gets ranges of 265 to 270 miles from that battery, whereas the Mirai is expected to get 250 to 300 miles from its fuel, though the EPA hasn’t issued a final rating yet.

That implies a fuel cell of slightly more than 50-percent efficiency, plus other losses in the system.

Range is around 300 miles, refueling will take about five minutes, and fuel is included for the first three years of ownership. The powertrain has an eight-year/100,000-mile warranty to allay early-adopter concerns.

The Mirai was unveiled at the November 2014 Los Angeles Auto Show. Toyota plans to build 700 vehicles for global sales during 2015.

Retail sales in the U.S. are scheduled to start by mid-2015 at a price of US$57,500 before any government incentives, and initially will be available only in California.

The market release in Europe is slated for September 2015, and initially will be available only in the UK, Germany and Denmark, followed by other countries in 2017. Pricing in Germany starts at €60,000 (~US$75,140) plus VAT. [Wikipedia]