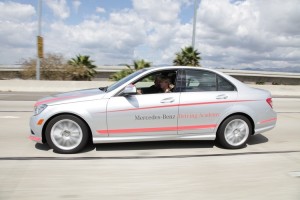 Trainers claim that Los Angeles is the driving capital of the U.S., which makes it a great place for a driver training academy. Plus, California driver training laws don’t give teenagers enough time behind the wheel.

In fact, they receive 30 hours of classroom training and 6 hours of behind-the-wheel training. That’s just not enough.

That’s stepping it up a bit!

The school uses a mix of Mercedes-Benz C class sedans and larger ML hybrids because “so many kids that get licenses learn in small cars and their first car is an SUV,” Duchene said. “We wanted students to learn on a vehicle similar to what they’ll be driving once they’re out on the road.”