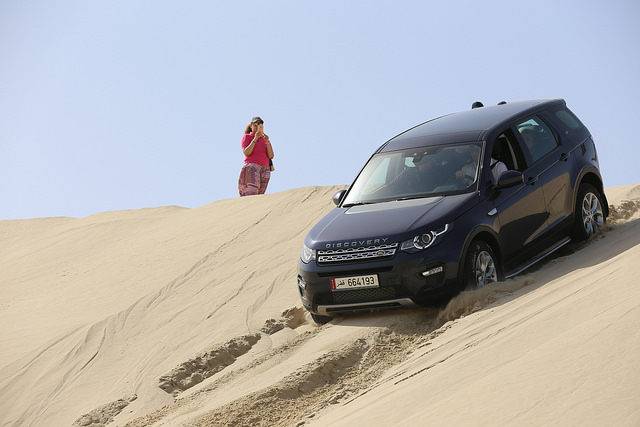 The Discovery Sport was Land Rover’s first step to a new future. It replaced the aging Freelander, and breathed new life into the Land Rover range. Unfortunately, rather than announcing with a bang, it limped out with a few early niggles. The car itself is fantastic. After all, it’s built by Jaguar Land Rover who have a history of quality. Yet, one or two small things let it down. A noisy engine, a fat fuel consumption, and a lumpy suspension stopped it from making a big entrance.

With the 2015 upgrade, Land Rover have built the car it should have built in the first place. Let’s hope the new model isn’t overlooked, because the Discovery Sport has become the car it was meant to be. The manufacturers have subtly addressed drivers’ concerns with a new engine and refined driving. The team at Hunters Landrover told us to expect new deliveries shortly, so it won’t be long before it hits the market. Luckily, we got our hands on an early release version. Here’s our verdict.

The first thing you notice about the new Discovery Sport is… well… nothing at all. Stylistically, Land Rover haven’t changed a thing. Which is strange for mid-cycle upgrade. Manufacturers often like to tweak the design a little, just to give it separation from the old model. In fairness to Land Rover, the design of the Discovery Sport was never an issue. It boasts a beautiful design, making an enormous car seem sporty and elegant.

It’s under the bonnet that Land Rover have made real changes. Land Rover have thrown the old Ford-built engine away, and replaced it with their unique Ingenium model. It takes the Discovery away from the commercial masses, and gives it the refined quality it deserves. The first thing you notice here is the quiet sound the engine makes. The old model would rattle and cough. The ingenium engine purrs and hums. It’s a subtle change, but it finally feels like the Discovery deserves its price tag. It comes with two options, a 150bhp engine or a 180bhp version.

The real question is, does that quiet engine alter the driving experience? Quite simply, yes it does. Thanks to a little more torque, the car handles much better. It’s responsive, punchy, and almost explosive off the line. The added torque gives you a lot more confidence in the corners so you can throw it around without worrying. It feels like a sports car. In fact, it’s very easy to forget you’re driving a monster 7-seater.

Land Rover have also addressed the question of fuel economy. The original version was marked down for its CO2 emissions and consumption. Although it doesn’t quite measure up to the best in class, the new engine has improved efficiency somewhat. It boasts a CO2 emissions output of less than 130g/km.

Inside the car, there’s very little change. The interior is still heavily focused on simple practicality. The Discovery Sport is well kitted out with technology but isn’t ostentatious. The seven seats are all comfortable and spacious; perfect for the larger families.

With the new Discovery Sport, Land Rover have made the car they should have built in the first place. Better late than never! Trust us, this is a phenomenal vehicle.