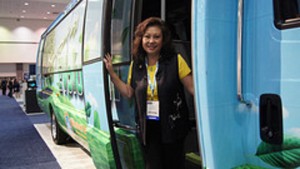 Gas isn’t getting cheaper. That’s many auto drivers, government agencies, cities and municipalities, state governments, and even the auto industry itself is looking for alternatives to carbon fuel for powering vehicles. One of those alternatives is electric energy and California may soon lead the way to the future of electrical vehicles with a mass influx of electric power stations.

A city council member from Cerritos, California joined many other civic leaders recently in touring the LA Electric Vehicle Symposium (EVS26), which has a renown for being the world’s largest event for electric drive technologies. What came out of this meeting and a discussion with auto industry leaders from General Motors, Nissan, Toyota, and Mitsubishi is astounding.

NRG Energy, Inc., a California power company, lost a lawsuit with the state over energy billing disputes and as a result of that lawsuit the company agreed to build at least 200 fast-charge stations and install wiring for 10,000 recharging units at 1,000 colleges, hospitals, and work sites all over California. The stations will allow electric vehicle owners the ability to recharge their batteries within 30 minutes.

This could very well hasten the sales of electric vehicles in the state of California. And if that happens the rest of the nation could follow. It could be as soon as a decade before electric vehicles make up half the cars on the road.