The new Audi A2, manufactured in Germany, has broken a record for the longest run in a production-ready electric vehicle without refueling.  Traveling from Munich to Berlin, the vehicle went 600 km (373 miles) without refueling.  That’s more than a 30 mpg vehicle with 12 gallons of gasoline can travel, making the Audi A2 competitive with modern gas-powered vehicles where refueling is concerned. 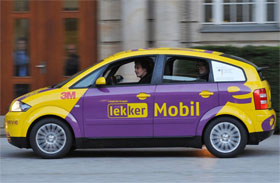 However, an experimental Japanese car has traveled farther, approximately 1000 km (621 miles) without a refuel, but this was not a production vehicle, and it was extremely expensive to create.

In a bold statement, the driver of the Audi A2, Mirko Hannemann, when exiting the new electric vehicle, said, “If any journalists want to charge up their iPhones, we still have some electricity left.”  In the recent past only capable of traveling approximately 70 km (43 miles) before refueling, this statement sums up the confidence electric automakers have in this new technology, which is now competing with gasoline-powered vehicles as far as distance traveled is concerned.

Once a pipe dream of green fanatics, electric vehicles and other hybrid vehicles seem to be well on their way to becoming a realistic mode of travel.