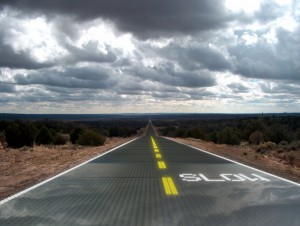 How do you solve the energy crisis and the transportation problem in one whack? An inventor named Scott Brusaw has the answer: Solar roadways.

Solar roadways involve taking scraps from landfills and converting it, along with other materials, into an infrastructure of roadways that are in essence made of glass and operate as solar panels. He’s already built a prototype.

If successful, the solar roadway project has long range implications in a number of areas practical to society including:

So how soon could we see our first solar roadway? According to Brusaw, it could be within two years.

How’s that for a complete overhaul?