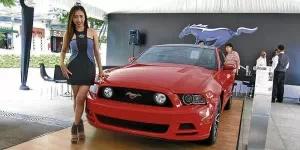 A look at some of the 2012 automotive highlights in the Philippines has some interesting roll outs. According to the Inquirer, here are 12 of the best auto announcements this year:

We’re particularly excited about the Ford Mustang announcement because it’s the only truly American vehicle to make the announcements. No Chevy and no GMC.

Ford’s in great company here. The new Mustang comes available with a 3.7-liter V6 Premium engine or the 5-liter V8 GT Premium engine. Both engines are remarkable and are offered at incredible price points in the Philippine market.

American cars are on the go in markets worldwide, but residents of the Philippines sure love their Mustangs.