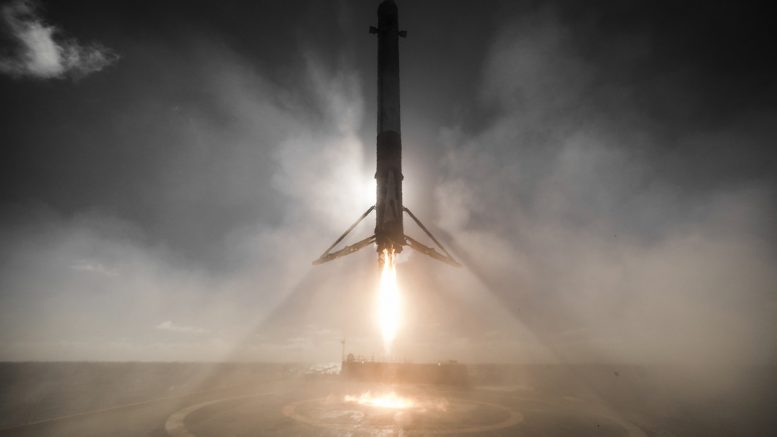 It was one giant leap for SpaceX on Thursday evening when it successfully completed the first reflight — and landing — of an orbital class rocket.

Elon Musk and his team have completed numerous rocket launches and landings over the last 16 months, but bringing a Falcon 9 rocket back home for a second time takes the development of its reusable system to the next level as it continues in its quest to drastically reduce the cost of space travel.

A 20-mile Long ‘Spacescraper’ Dangling from an Asteroid: Could it Work? (CS Monitor)

It’s a new approach to an old idea. While Jonathan Swift’s fantastical island city of Laputa stayed aloft via magnets, a New York City design firm envisions using an orbiting asteroid to hang a skyscraper above the Earth.

Clouds Architecture Office espouses a dream-big-or-go-home philosophy with its plan to construct the world’s “tallest building ever.” The 20-mile high (or long) megastructure would dangle from an asteroid suspended by a cable system tens of thousands of miles long.

A number of engineering hurdles stand in the way, so would-be atmospheric settlers of tomorrow will have plenty of time to save up for a down payment. Nevertheless, today’s humble surface-dwellers may see inspirational value in proposing such castles in the sky, regardless of their feasibility.

At some point, some humans somewhere will take off on a voyage for Mars. Sooner rather than later, a space agency (probably NASA) will investigate the icy worlds of Europa and Enceladus for life. To help with these investigations, NASA has developed the Pop-Up Flat Folding Explorer Robot, better known as PUFFER.

With a design inspired by origami, PUFFER is a concept that could provide “simple, low-cost access to new high-value extreme terrains.” NASA mentions the caves and lava tubes of Mars as possible travel locations, as well as the “icy ‘chaos terrains’ on the surface of Europa.”